Austria is a landlocked country in Central Europe, bordered by Germany, the Czech Republic, Hungary, Slovakia, Slovenia, Italy, Switzerland, and Liechtenstein. Austria is one of the world's richest countries with a very high standard of living. In 2020, Austria has an estimated population of 9.01 million.

Austria's current population is estimated at 9.01 million, up from its last official census. The last Austrian census was preliminary results conducted in 2011, showing a population of 8.421 million, up 5% over the last ten years. This makes Austria the 97th most populated country in the world.

Austria is a landlocked country in central Europe that has a claim of 32,386 square miles (83,871 square kilometers) of surface area. The land itself is mostly mountainous, rugged terrain with abundant forests, and it shares its borders with Italy, Slovenia, Hungary, Slovakia, Germany, Switzerland, and the Czech Republic. Using the 2017 population of 8.78 million people, the population density of Austria is 271.1 people per square mile (104 people per square kilometer). This makes Austria the 75th most densely populated country in the world.

Two-thirds of people in Austria live in, or close to, a city center. The capital and largest city in Austria is Vienna, with a population of more than 1.8 million. and a metro population of 2.6 million. Vienna is very densely populated with more than 4,000 people per square kilometer (10,366/square mile). Other notable cities with populations over 100,000 include Graz, Linz, Salzburg, and Innsbruck.

There are 185,000 Turks, including Turkish Kurds, in Austria today, accounting for 2.2% of the population. This is the third largest ethnic minority after Serbs and Federal Germans (2.7%).

There are three "traditional" ethnic minorities within Austria that have found themselves within Austria as a result of European boundary changes over the years. They are Carinthian Slovenes, Croats and Hungarians. None of these groups number more than 50,000, and all have their rights protected by law.

Modern immigration has resulted in the creation of a number of sizable new ethnic groups in Austria. Notably, more than 300,000 people came to Austria from the former Yugoslavia during and after the wars there, as well as more than 300,000 from Turkey. Many have been naturalized and are now Austrian citizens.

German is the first language of 88.8% of Austrians as well as the official language of the country. It is slightly different from the German spoken in Germany - in practice it doesn't differ much, though, and if you speak German you will be easily understood in Austria. The other main languages are Turkish (spoken by 2.3%), Serbian (2.2%) and Croatian (1.3%).

According to the 2001 census, there are 8,140 Jews in Austria (around 0.5% of the population). Prior to the Holocaust, Austrian Jews made up between 8 and 10% of the total population.

Austria is the 12th richest country in the world.

Austria's official boundaries were not established until the 1919 Treaty of St. Germain when its first constitution was created. Soon after its formation, Austria was declared a "German state," and fought with them in both world wars, incurring countless fatalities. The growth rate was never really given the time to get off of the ground and has never been drastic in the years since.

Across the entire country, the majority of the population increase recorded between 2001 and 2011 is as a result of immigration into Austria - the number of people living in Austria but born elsewhere increased by 35% over the past decade. Austria estimates that 81% of its population had no migration background, while about 19% had at least one parent of migrant background. There are estimated to be 415,000 descendants of foreign-born immigrants in the country.

According to law, bilingual signs should be used in areas of the country populated by Austria's "traditional" ethnic minorities (Carinthian Slovenes plus Croats and Hungarians in Burgenland). This law has not always been followed in practice, however, and remains a significant political hot topic.

How Many People Live in Austria? 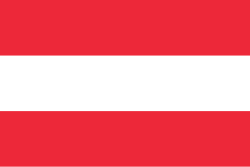 Austria is currently growing at a rate of just 0.01% per year. Its population is expected to remain fairly stable with a low growth rate until the end of the century.