Located in central Europe, the hilly country of the Czech Republic is landlocked and surrounded by Germany, Poland, Slovakia, and Austria. In 2020, the Czech Republic has an estimated 10.71 million residents, up slightly from the 2011 census figure of 10.4 million. The Czech Republic covers a total surface area of 30,450 square miles (78,865 square kilometers), which ranks 118th in the world in terms of size. The country's population density is 347 people per square mile (134 people per square kilometer), which ranks 62nd in the world.

The country has one of the least religious populations globally with the third-highest percentage of atheists (34%) after China and Japan. The Czech people have historically been considered indifferent toward religion in general. A poll in 2010 found that just 16% of Czechs say they do believe in a God, which is the lowest rate among all European Union countries.

While part of the economy of the European Union, the Czech Republic uses its currency, the Czech koruna, and has a fairly stable economy on its own. The Czech economy is highly dependent upon their exports, and services like high tech engineering, electronics, automotive, and machine-building account for 60% of their GDP. The industry sector makes up most of the remainder of their economy. Agriculture makes up a small 2.5% of the nation's GDP and includes products like cereals, vegetable oils, and hops. The government in the Czech Republic is a unitary parliamentary constitutional republic, which means that there is both a president in charge of the state and a prime minister that leads the government.

Evidence of prehistoric human settlements in the region date back to the Paleolithic era, and the modern-day Czech Republic has been inhabited and conquered by many groups over its long history. About 1.4 million people from Czechoslovakia fought in World War 1, and by 1938, the country was 10th in world industrial production. It was eventually occupied by Germany and later peacefully divided into the Czech Republic and the Slovak Republic in 1993.

Today, the Czech Republic has one of the lowest fertility rates in the world, well below replacement value, and growth is now entirely driven by immigration. The country is currently growing at a very slow 0.1% a year and there hasn't bee significant net change in the population for quite some time.

How Many People Live in Czech Republic? 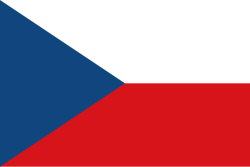 The Czech Republic has one of the lowest fertility rates in the world, well below replacement value, and growth is now entirely driven by immigration.