Indonesia is a sovereign archipelago in Southeast Asia and the fourth most populous country on earth after China, India, and the United States.

Indonesia is made up of more than 17,000 islands with over 1.9 million square miles of land, which makes it the 4th largest country. Indonesia has a population estimated at 273.52 million in 2020, up from the 2015 estimate of 257 million. About 56.7% of Indonesia's population lives on Java, the most populous island. The population density of Indonesia is currently at 140.08 individuals per square kilometer.

According to the 2010 official population data, Indonesia has 11 cities with a population over 1 million, although estimates from 2014 show that there are now 14 cities that have populations that exceed 1 million. The 10 largest cities in Indonesia, with populations as of 2014, are:

Jakarta isn't just the most populous city in Indonesia; it's also the most populous in Southeast Asia and the 14th most populated city on earth. The official metropolitan area, known as Jabodetabek, is the third largest in the world, and the metropolis's suburbs extend even further. The entire area has a population of over 30 million, which makes it one of the largest conurbations on earth. It's also one of the fastest-growing cities on earth, growing faster than Beijing and Bangkok, with a population density in the city proper of 15,342 people per square kilometer (39,740/square mile).

Chinese Indonesians account for about 3% of the population but they are influential, controlling most of the country's wealth and commerce.

In addition to this diverse population, Indonesia is also the world's most populous Muslim-majority country, as just over 87% of Indonesians declared Muslim on the 2010 census. 9.87% are Christian, 1.69% are Hindu, 0.72% are Buddhist and 0.56% practice other faiths. The Indonesian constitution grants religious freedom although the government only officially recognizes Islam, Protestantism, Roman Catholicism, Buddhism, Hinduism, and Confucianism.

There are more than 700 languages spoken in Indonesia. Bahasa Indonesia, a form of Malay, is the official language and is used mostly in education, media, commerce, and administration. Most people in Indonesia actually tend to speak other languages as their primary language, however.

The median age of the population in Indonesia is approximately 30.2 years of age, 42.4% of the population between 25 and 54 years of age. The 0-14 age group is currently just over 25%, strengthening the number of youths that will come into the workforce as the current workers move past working age.

Another interesting statistic involves the ages of the Indonesian population and although these figures date from the previous national census of 2000, they still tell an interesting story. Of the total 2000 population, 27.3% were aged between 0 and 14 years, 66.5% between 15 and 64, while just 6.1% of the population of Indonesia were aged over 65.

That final figure of 1.04% may not seem like a lot but on a population of over 250 million, it leads to some significant increases. As the Jakarta Post reported in 2013, Indonesia's population has doubled within just 40 years from 119 million in 1971 to almost 240 million in 2010, based on figures from the Central Statistics Agency. In another 40 years, the country's population is expected to climb much higher.

According to the Jakarta Post author, the high Muslim population in Indonesia is leading to a very high birth rate, which cannot be sustained. The article points out that Jakarta, Indonesia's largest city, is in a naturally flood-prone area, and the depth and extent of floods only increases as the population density increases.

Unfortunately, Indonesia's attempts at family planning education and population control have not been very successful, and it's hard to say how sustainable the country's growth will be.

How Many People Live in Indonesia? 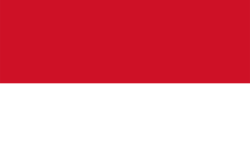