Ivory Coast, officially the Republic of Côte d'Ivoire, is a nation in West Africa bordered by Ghana, Burkina Faso, Mali, Guinea, Liberia and the Gulf of Guinea. In 2020, Ivory Coast has an estimated population of 26.38 million, which ranks 53rd in the world.

The last census in Ivory Coast took place in 1998 and found a population of 15.37 million, up from the 6.7 million people in the country at the first census in 1975. Today, Ivory Coast has a population density of 64 people per square kilometer (166/square mile), which ranks 139th in the world.

The largest city is Abidjan, a port city with a population estimated at 4.5 million and a metro population exceeding 5.1 million. Abidjan is the 3rd largest French-speaking city in the world after Paris and Kinshasa, and only Lagos has a larger population in West Africa. The capital of Ivory Coast is Yamoussoukro, which has a population of 355,000, which makes it the country's 4th most populous city.

Ivory Coast is home to many ethnic groups. The largest is the Akan at 42%. Akans are an indigenous ethnic group, but not a racially homogeneous ethnicity. The next largest ethnic groups are the Gur (17.6%), Northern Mandes (16.5%), Krous (11%), Southern Mandes (10%). There are about 30,000 Lebanese and 45,000 French as well. About 4% of the population is non-African, which includes French, Lebanese, Vietnamese and Spanish residents, along with missionaries from the U.S. and Canada.

77% of the population are considered Ivorians, and represent many cultural and linguistic groups. There are around 65 languages spoken in Ivory Coast, but the most common is Dyula, which is spoken by most of the Muslim population.

The native-born of Ivory Coast are split into Muslim (38.6%), Christian (32.8%) and animist or indigenous religion (28%). Ivory Coast is one of the most economically successful countries in West Africa, and about 20% of its population is workers from neighboring countries Guinea, Burkina Faso and Liberia.

Since 2016, the Ivory Coast has been the fastest growing economy in Africa, with an astonishing annual growth rate of around 8%, which is much higher than the surrounding nations. Even though the country is doing well financially overall, there is extreme wealth inequality and over half of the coast remains in poverty. The growth the Ivory Coast is experiencing is due to the African Development Bank returning to the area in 2014, the building of the HKB bridge to connect the wealthy residential part of the country to the industrial districts, and large investments in the country's energy sector.

For many centuries, the Ivory Coast was ruled by one of many Island Empires of the region. The French began to have an interest in exploring the area in the 1600s, but they didn't gain control over the country until the mid-1800s. The French behaved as though their culture was superior to those of the native people and pushed their language and customs on them.

After loyalty from the indigenous people during the Second World War, France granted French citizenship to those under the French rule, further encouraging the people of the Ivory Coast to assimilate. However, they were allowed to become an autonomous nation in 1958. Ivorians have engaged in two civil wars since the turn of the 21st century, killing many of their own, largely over who is power.

A government survey in 2012 found the country has a fertility rate of 5.0, which is just 3.7 in urban areas like the capital but 6.3 children per woman in the rural areas. Ivory Coast has a life expectancy of 41 for men and 47 for women, with a high infant mortality rate of 118 per 1,000 live births. Ivory Coast is currently growing at a rate of 2.5% per year.

How Many People Live in Ivory Coast? 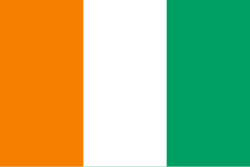