Sometimes known as Burma, the Republic of the Union of Myanmar - which is often shortened to Myanmar, is a sovereign state in Southeast Asia. Myanmar is the 26th most populous country in the world, and the 40th largest country by area, with a 2020 estimated population of 54.41 million.

In 1989, an unelected military regime changed the name of Burma to Myanmar. However, the BBC reports that not all countries give legitimacy to the change due to the fact that the change was brought by the unelected military regime. Some countries, and the United Nations recognize the name change due to the paperwork and preference to allow members to name themselves as they wish so long as the decision is recorded. Interestingly enough, "The two words mean the same thing and one is derived from the other. Burmah, as it was spelled in the 19th Century, is a local corruption of the word Myanmar", according to the same report above.

Myanmar has 676,578 square kilometers of surface area available within its boundaries. This includes 1,930 km of coastline. When calculated with the estimated current population of 54.41 million, the population density overall is approximately 79 people per square kilometer.

Rangoon/ Yangon is the largest city and the capital of the area. It contains 4,477,638 residents. Mandalay comes in second, with 1,208,099; and is also known as the economic center of the country.

The country is very ethnically diverse with 135 ethnic groups recognized by the government. There are at least 108 ethnolinguistic groups in Myanmar. The Bamar account for around 68% of the population, followed by the Shan (10%), Kayin (7%), Rakhine (4%) and overseas Chinese (3%). Ethnic minorities in the country prefer to be called ethnic nationalities to fight against the proliferation of the dominant Bamar people. Other ethnic groups include the Mon (2%), Overseas Indians (2%) and the Kachin, Chin, Anglo-Indians, Nepali and Anglo-Burmese.

The official language used is Burmese, with some ethnic groups using their own languages.

The median age in Myanmar/Burma is 28.2 years of age, with a total life expectancy of approximately 68.2 years. The quality of life can be examined in numerous manners, including exploring healthcare, access to improved sanitation and drinking water, as well as the World Happiness Report. Only 2.3% of the GDP is spent in the healthcare sector, and this is likely related to the low physician and hospital bed density in the area. There are only .57 physicians and .9 beds available per 1,000 residents. Just over 80% of the country has access to clean drinking water with only 77% having access to improved sanitation facilities. When referring to the World Happiness Report, we see a ranking of 130, with an overall rating of 4.3 out of 10.

Now, the last partial census was conducted in 1983, and until 2014, the last officially recorded nationwide census hadn't occurred since 1931. It's believed there are at least 300,000 refugees from Burma located along the Thai-Burma border, with many camps established in the 1980's. Illegal groups are not recognized as citizens in the country, and they have been relentlessly persecuted. This led to the expulsion of close to 300,000 Burmese Indians.

Myanmar has maintained steady growth over the past century despite its battles both in ending British rule and with the ongoing civil wars. The country experienced a spike in population in the 1960s, and since then the nation continues to grow, but at a slower pace.

How Many People Live in Myanmar? 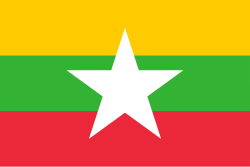 Myanmar is currently experiencing steady if somewhat low population growth. It's hard to say what the population will be in the future, but one thing is sure: Myanmar is facing an aging population and this problem must be addressed.