The Norway population gave confirmed figures of their numbers from the census of 2012. This showed that the population within the country stood at 5,006,470 in 2012. Today, the UN estimates that number to be 5.42 million, ranking Norway 119th in the world.

Norway is a Scandinavian country in Northern Europe that has a landmass of 148,728 square miles (385,203 square kilometers), which ranks 62nd in the world in terms of sheer size. The country is made up of the northern portion of the Scandinavian peninsula, Jan Mayen Island and the archipelago of Svalbard and its mountainous coastline is broken up by fjords and thousands of islands. Norway shares its borders with Sweden, Finland, and Russia as well as the Barents, Norwegian, North and Skagerrak Seas. For every square mile of land, there is an average of 35 people living here, which converts to 14 individuals per square kilometer, making Norway only the 171st most densely populated country on the planet.

With slightly over 80% of the population living in or around major cities, it is safe to say that Norway is a fairly urban country. Oslo is the capital of Norway as well as the most populated city, with more than 580,000 people living within the city limits, not including the metropolitan area. The metro area is estimated to have over a million residents. Oslo is where the majority of manufacturing, shipping, banking, and trade happen in Norway. It is the second most expensive city to live in after Tokyo. Located on the west coast, Bergen is the second-largest city, with 213,585 residents. Bergen has the biggest port in Norway and was the largest city in the country until 1830. Other sizable cities with populations in excess of 100,000 include Trondheim, Stavanger, and Bærum.

The official languages of Norway include Bokmal Norwegian and Nynorsk Norwegian, and some residents use Sami and/or Finnish languages as well. The ethnicities in Norway are recorded as Norwegian 83.2% (includes about 60,000 Sami), other European 8.3%, other 8.5% by the Factbook as well.

Religious people in Norway are mostly Christian, with 71.5% showing affiliations with Church of Norway (Evangelical Lutheran - official), 2.8% of people are Roman Catholic, and 3/9% practicing another denomination of Christianity. Muslims make up 2.9% of the Norwegian populous, 2% practice a different religion, and 16.8% of the population are unaffiliated with any faith. Like all people of Scandinavian origin, early Norwegians Norse Paganism. Missionaries brought Christianity to the area around the year 1000.

Statistics released by the CIA World Factbook give us an overall picture of age breakdowns and life expectancy within Norway itself.

Turning to life expectancy figures, the most recent estimate was given in 2010 when it was shown that the average figure was 81.04 years which could be divided between 78.85 years for males and 83.15 years for females.

Norway is an ancient country and it is claimed that as far back as 1665, there were already 440,000 people living here. Steady growth through the ages has continued to the point where the Norway population in 2014 now stands at approximately 5,091,246.

Historical landmarks were reached in 1825, when the population of Norway hit 1,051,318 and thereby exceeded one million for the first time in the country’s history and in 1900, the numbers had reached 2,240,032.

Throughout the 20th century, population growth was steady and on a census by census basis, it generally increased by between 0.5% and 1% annually.

Source: By User:Sveter (Please credit as "Petr �merkl, Wikipedia" in case you use this outside WMF projects.) [CC BY-SA 3.0 (https://creativecommons.org/licenses/by-sa/3.0)], from Wikimedia Commons

How Many People Live in Norway? 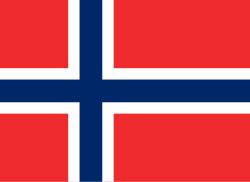 Norway has a relatively consistent population growth year on year and the only slightly negative statistic is the fact that it has a fairly high percentage of people aged over 65,

A growth of immigration has also helped to swell numbers however and the CIA World Factbook estimates that current levels of growth will take the population of Norway to 7,032,687 by the year 2060.