Peru, officially the Republic of Peru, sits in western South America. The region has a long history of ancient cultures, including some of the oldest in the world, and finally achieved independence in 1821. Today, Peru's population is very multiethnic and in 2020 was estimated to be around 32.97 million people.

By population, Peru is the 43rd largest country, and the fourth largest in South America, outstripped only by Brazil (204.5 million), Colombia (48.5 million) and Argentina (43.1 million).

The law in Peru requires that the Government hold a census every ten years. In total, there have been 11 censuses held in Peru since the first in 1836. Generally (see the next paragraph for the exception), the data collected is considered fairly reliable.

Based on the latest figures, Peru's 2018 population is estimated at 32.97 million. Its current population density is just 25 people per square kilometer (or 57/square mile), which makes it the 182nd most densely populated country.

The largest city in Peru is its capital city, Lima. It is home to more than a quarter of Peruvians and the country's largest city by far with a population of over 8 million. Additional large cities in Peru include Arequipa, Callao, and Trujillo.

The city of Lima proper is, according to 2016 estimates, home to 8,852,000 people. This makes it the 20th largest city in the world, equivalent more or less to London.

The last census in Peru that attempted to classify its population by ethnicity occurred in 1940, at which point 53% of the population was white or mestizo (white and Amerindian ancestry) with 46% Amerindian. The CIA World Factbook cites the majority of Peruvians as Amerindians, particularly Aymara and Quechua, followed by mestizo people at 37%.

There are estimated to be 15 uncontacted Amerindian tribes in Peru as of 2016.

The further inland, the higher the density of the Amerindian population. The original Amerindian population was devastated by the arrival of colonists from Spain in the 1520s and dropped from an estimated 9 million in the 1520s to around 600,000 a century later. The catastrophe was caused by a mixture of smallpox, to which Amerindians had no natural immunity, war and the economic chaos that followed the collapse of the Inca Empire.

Europeans are largely descendants of Spanish and Italian settlers, but following waves of settlers from other European nations also left their mark and there are many descendants of British, German and even Croatian colonists. The highest proportion of Europeans can be found in the northern highlands, in coastal areas and in Peru's major cities.

Asian Peruvian numbers are unclear; the source used in the box above gives figures of both 1% and 3% of the population. The bulk of Peru's Asian population is descended from Chinese and Japanese immigrants. Notably, Alberto Fujimori, Peru scandal hit President from 1990 to 2000 was of Japanese descent.

Afro-Peruvians make up around 1-2% of the population and are largely descended from slaves transported to Peru in the 18th and 19th centuries. Like the descendants of European colonists, Afro-Peruvians are largely concentrated in the coastal cities.

Christianity is by far the most dominant religion in Peru, but there are different branches that are followed. The most popular branch of Christianity in Peru is Roman Catholicism. Many Peruvians have blended their Christian beliefs with traditional Peruvian belief systems, for instance, many equate the Virgin Mary to be an equivalent of the Peruvian Pacha Mama (Mother Earth).

As well as the official languages listed above, around 150 other indigenous languages are known to be spoken in Peru today (although the exact number cannot be determined as there are still a number of un-contacted or rarely contacted tribes in the country).

Today Spanish is spoken by more than 80% of Peruvians and Quechua by 16%. As its urban population increased in the second half of the twentieth century, Peru saw a steady shift toward speaking Spanish. Recently, though, an increased effort has been made to promote the teaching and usage of indigenous languages, so it is possible they will see a resurgence in use.

Peru is a very multiethnic country and its population has been formed by various groups for more than 500 years. The area was inhabited by Amerindians for thousands of years prior to the Spanish Conquest in the 1500s, and their population decreased from 5 to 9 million in the beginning of the 16th century to just 600,000 one hundred years later due to infectious disease. Spaniards and Africans then moved into the area, mixing with each other and indigenous people of the region, with European immigration from Italy, Germany, Britain and France following behind. Peru freed its black slaves in 1854, then Chinese immigrants began moving into the region to replace the slave workers.

The last census in Peru was controversially held in 2007, just two years after the 2005 census. The census was officially held because of inaccuracies in the 2005 census, although many felt that the government's decision to re-run the survey was politically motivated. The decision to make everyone stay at home on the day of the census and for most businesses to close caused a great deal of anger, and was estimated to have cost the country up to $250 million.

In 2017, the most recent official census was held. As with the prior census in 2007, all residents were instructed to remain in their homes for the duration of the census, and required certain residents to obtain special permission to leave their home if their employer required it.

How Many People Live in Peru? 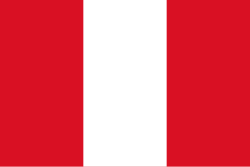 After a very long period of decline in the country, with its population dropping steadily from the 1960s until just a few years ago, Peru is finally seeing positive growth. According to some estimates, Peru could sustain an average growth rate of 5.5% for 40 years and jump to the 26th most populous country from its current rank of 42nd.

Peru is one of the 26 fastest growing countries, and its population is predicted to reach almost 42 million by 2050.