Just recently, Syria was considered a rapidly growing country in the area, growing over 2% in 2009, and growing from just 6 million in 1971 to its current population of 17.50 million.

Syria's population is comprised of many refugees from other countries. In 2012, it was estimated that 1.8 million refugees in the country were from Iraq, most of whom were displaced during the Iraq war. Syria has also been home to large groups of Palestinians [(560,000)](http://www.unrwa.org/syria-crisis#Syria-Crisis-and- Palestine-refugees) and Armenians (100,000.) Of course, that's now in the past, as Syria has been in a great deal of turmoil and its population is now tumbling out of control.

While Syria's population was currently around 18 million in 2018, this number is changing every day. The United Nations reports that 5,000 people flee Syria every day, and 28% of its population has now been driven from their homes. There are now 9 million Syrians who have fled, and 6.5 million who have been displaced but stay in the country.

The United Nations Office for the Coordination of Human Affairs (UNOCHA) states that an estimated 13.5 million Syrians are in need of humanitarian aid in 2016. There are now 4.5 million refugees from the country in nearby countries. 117,658 are in Egypt, 245,022 are in Iraq, 635,324 in Jordan, 1.1 million in Lebanon and 2.5 million in Turkey.

The Mediterranean Sea touches Syria on its Western border, and the country is otherwise touched by Israel, Jordan, Iraq, Turkey, and Lebanon. The country stretches across 71,498 square miles (185,180 square kilometers). Calculated with the 2019 population of 18,495,445, the population density of Syria is 259 people per square mile (100 people per square kilometer), making it the 86th most densely populated country in the world.

The largest city in Syria is not its capital Damascus, but Aleppo, which is situated in the North East of the country.

Aleppo's population was recorded at 2,132,100 in the 2004 Census, although it has dropped dramatically since, given the civil war and millions fleeing the country. As the country is embroiled in a war, updated estimates on city populations are unavailable or may be skewed due to the fluctuations caused by the chaos.

Damascus is the second largest city in Syria, with a population of 1,711,000 (estimate, 2009). It holds the record as the oldest continually inhabited city in the world; there is additional evidence of human habitation in Damascus dating back to 9,000 BC (however, historians have agreed that 2000 BC is the more likely time that Damascus was brought together into a single city from the smaller surrounding groups.

Syria is urbanizing rapidly. It is estimated that in 2010, 56% of the people in Syria lived in an urban environment, and this number is increasing by more than 2% per year.

Syria is a largely Islamic country; according to the latest data from 2007, 87% of the country's population was Muslim. Broken down, around 74% are Sunni and around 13% are Shia. There are approximately 2 million Alawi in Syria today, and representatives of this group dominate Syrian politics and the Syrian military. Syria's current President, Bashar al-Assad, is an Alawi Shia.

The largest ethnic group (approximately 90%) in Syria is Arab, mostly classified as Levantine. Other major groups in Syria are Kurds (2 million), Syrian Turkmen (0.75-1.5 million) and Assyrians (0.9 to 1.2 million).

The median age in Syria is currently at 24.3 years while life expectancy is approximately 75.1 years of age.

Although 80% Muslim, it is also home to one of the largest Christian populations in the Middle East. According to the latest estimates, approximately 12% of the city's inhabitants are Christian. The other two major religious groups in Syria are Christian (around 9% of the population) and Druze (3%).

In the World Happiness Report, Syria understandably ranks near the bottom of the chart in 2018, with a ranking of 150 out of 156 participating countries, with a rating of 3.46 in overall happiness on a scale of 0 to 10. Some contributing factors to this low rating include the low GDP per capita, the low social support, a lack of freedom to make choices, and of course the current instability considering the current situation.

Less than 10% of the population struggle with access to clean drinking water or improved sanitation facilities.

Literacy in Syria is only at 86.4% of the population over 15 years of age, with only 9 years expected to be dedicated to schooling.

Syria was run under the Ottoman empire for centuries until the French overthrew the during World War I. Under the French, there were brief periods of autonomy until Syria gained independence in 1946, and quickly after took part in the Arab-Israeli war for nearly 2 decades. In September of 1980, the Iran-Iraq war began and Syria sided with Iran. In the US war against Iraq, Syria sided with the US against Iraq against in tradition with the rivalry between Baathist leadership in Iraq and Syria. However, Syria's relationship with the US hasn't remained friendly since President Bush listed Syria as one of many countries that make up an "axis of evil," and Syria eventually ended up restoring diplomatic relations with Iraq.

The growth rate in Syria plummeted from around 3%, to under -3% around 2011 when Syria allegedly was running a covert nuclear program reactor program, which would violate peace treaties they were held under. President Assad showed began widely showing his capabilities of cruelty towards his own people around that time, killing many under the guise of restoring order. Internal conflicts became so dire, the millions of citizens sought refuge elsewhere, which was the cause of the dramatic decrease in population growth.

Syria's bloody civil war has done substantial damage already, and the country is in ruins, in many ways. Civilian neighborhoods have been bombed, sniper fighting and street fights have taken over and there is no end solution in sight. In mid-2012, rebels moved into Alebbo, the largest city in Syria, and 2/3 of the city was seized within weeks. Now, regime and rebels are locked in warfare, and the city crumbles. In 2016, it has been estimated that 470,000 people have been killed in Syria's war. Hafez al-Assad's Alwaite regime represents just one-eighth of the country, and the Sunni Muslims (who make up 75% of the country's population) make up the resistance.

How Many People Live in Syria? 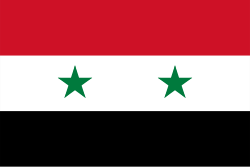 5.2 million refugees are expected to be registered as refugees by the end of 2014, with another 6.5 million internally displaced by December 2014.

In 2010, Syria was dealing with a surging population, but this has dramatically reversed. Last year, the population growth rate was -0.8%, but this has dropped much further. The number of refugees alone will top 5 million by just 2015, according to the UN, which means that Syria's population will be just 19 million in 2017. This drop does not include any further deaths from the country's civil war, which will only drive the population down past this point.