The flag of the Bahamas features a horizontal triband design and a chevron placed along the hoist-side of the flag. The colors that are used on the flag have significant symbolism surround culture, politics, and the regions of the Bahamas. This includes natural resources, as well as features of the Bahamian people including strength and vigor. In the next section, we’ll break down each color used in the Bahamian national flag and what these colors represent.

The chevron was added to the flag as a representation of the determination of the Bahamian people when cultivating the nation’s many natural resources.

The Bahamian flag’s triband design features aquamarine at the top and bottom of the flag, while gold is used in the center. The chevron along the hoist side is black.

The color aquamarine is used as a symbol of the water that surrounds the Bahamas. The color gold is used to represent the country’s natural resources and the sun. The color black is a representation of the force, vigor, and strength of the Bahamian people.

During the 18th century, the Bahama Islands were a crown colony of the United Kingdom. In the 19th century, the flag used by the Bahamas Islands was the British Blue Ensign was used with the addition of the crown colony’s emblem. Despite being in use since the mid-1800s, the emblem was not made official until the 1960s.

The modern flag of the Bahamas was officially adopted on July 10, 1973. Its design has not changed since that time.

Because of the lenient regulations of registration, the flag of the Bahamas is commonly used as a flag of convenience by foreign-owned ships.

The Bahamian national flag was first hoisted on July 10, 1973 at midnight.

Three horizontal bands of aquamarine, yellow, and aquamarine with a black triangle on the left side 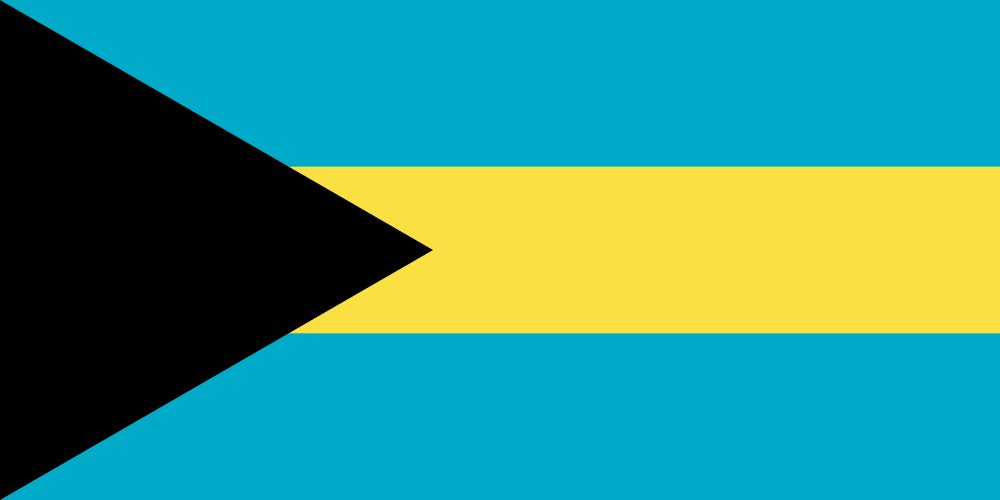