What does the flag of Canada look like? The Canadian flag consists of a red, white, and red vertical band with a red maple leaf in the center of the white band. This current version was updated and adopted on February 15, 1965 as the civil and state ensign as well as the national flag of Canada.

There is symbolism in both the design and the colors of the national flag of Canada. The colors are meant to symbolize hope and prosperity, as well as peace, tranquility and neutrality. The maple leaf design represents the cultural heritage of the nation and the natural resources of Canada.

Canada’s national flag features a vertical triband in the colors of red and white. There are two red vertical bands on the hoist and fly sides, and one white band down the center. The white band in the center is wider than the red bands on either side. The color red is used to symbolize prosperity and hope. The color white is used to reflect the impartiality of the nation, while also representing peace and tranquility.

There is also a 11-pointed red maple leaf centered in the middle of the white band. This maple leaf represents the culture heritage of Canada and the vast natural resources found within its borders.

The current national flag used by Canada was the first to be designated by law as the national flag. However, throughout its history, flags have been used in Canada.

The first known flag to be used in the nation was St. George’s Cross, which John Cabot carried when he reached Newfoundland in the late 1400s. New France also flew the military flags of the French in Canada. The Union Jack of the United Kingdom was also used in Canada when the British settled in Nova Scotia. This flag continued to be used even after Canada won its freedom from the U.K.

It was after the Canadian Confederation of 1867 that it was determined that Canadian flags were needed. The flag of the Governor General of Canada was the first to be flown. The Reg Ensign was also used on land and sea later in the 19th century. In the 1920s, Prime Minister William Lyon Mackenzie King hired a committee to design a flag but these plans fell apart. New designs for flags were proposed throughout the 1920s and 1930s, although none were adopted as the national flag.

The Red Ensign was recognized as the national flag during World War II. It was only in 1945 when the Senate and House of Commons were appointed to recommend a new national flag. The public submitted over 2,400 designs. The committee returned the following year with the recommendation of using the red ensign with a maple leaf in “autumn golden colors.” Despite the report, no action was taken to design a new national flag.

A nickname for the Canadian flag is “L’Unifolie,” French for “the one-leafed.”

The flag is also nicknamed The Maple Leaf.

There are no official laws that outline how to use the national flag. However, Canadian Heritage has issued a set of guidelines as to how to display the flag, whether by itself or among other flags.

February 15 has been designated as National Flag of Canada Day.

Three vertical columns, two red edges 25% each, white center 50% with a red maple leaf in the center of the white 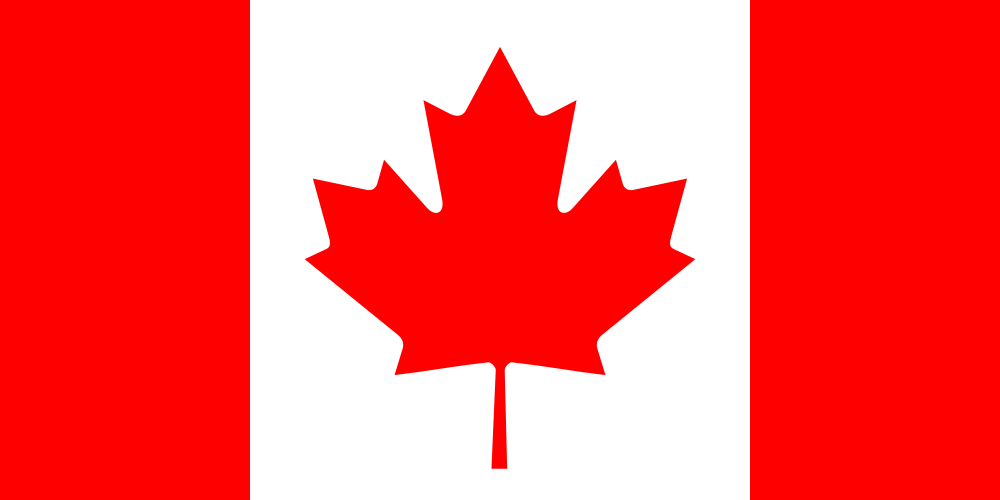