What does the flag of Cuba look like? The Cuban flag is made of five alternating blue and white horizontal stripes, and there is a red equilateral triangle on the left side of the flag with a white five-pointed star in the middle of it. The flag of Cuba was designed in 1849 and was adopted on May 20, 1902.

The flag of Cuba has colors and symbols that were selected to represent the history and ideals of the nation at the time of its inception. Three of the stripes are meant to symbolize the three departments of Cuba, of which the nation was divided. The other stripes were designed to symbolize purity and light. The triangle on the flag dates back to the French Revolution and represents equality fraternity and livery. The color red is used to symbolize courage and bloodshed, while the star represented Cuba as a new state that should be included in the United States.

There are three colors used in the Cuban flag. These colors are red, white and blue. The flag’s design is made up of three blue stripes alternating with two white stripes. On the hoist side of the flag is a red equilateral triangle. Centered within the triangle is a white five-pointed star.

The history of the Cuban flag dates back to the 19th century when Narciso Lopez moved from Venezuela to Cuba. He was involved in anti-colonial movements and was eventually exiled. Even when living in New York City, he continued to be a fighter for the independence of Cuba.

The flag’s first use was in 1850 when Lopez carried out a coup attempt to free Cuba. This attempt was a failure, but it was during the same year that the town of Cardenas hoisted the flag for the first time.

It wasn’t until 1902 when the flag was officially adopted. This occurred on May 20, the same day that the nation became independent. The flag was hoisted over the castles of the Tres Reyes del Morro in Havana. The specifications of the design were established just four years later, and to this day, the flag has remained unchanged.

The Cuban flag was designed by Miguel Teurbe Tolon.

The Cuban flag is just one of two communist countries that does not include symbolism in its national flag.

Five equal horizontal alternating blue and white stripes, with a red triangle on the left edge with a white star centered in the triangle 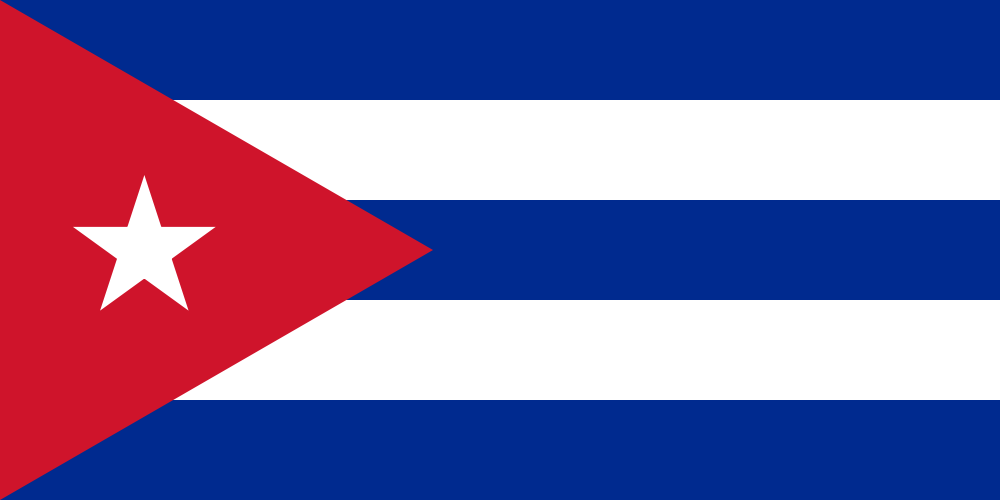