The national flag of El Salvador features a triband design that is used in the flags of other countries in Central America. The flag also features the nation’s coat of arms in the center of the horizontal triband design.

The colors of the flag represent the landscape and features of Central America. This will be discussed in more detail in the next section.

The national coat of arms features the text “Republica De El Salvador En La America Central” – which means Republic of El Salvador in Central America. The coat of arms features a triangle that represents the three branches of government in El Salvador. The design also features five volcanoes rising out of the Pacific Ocean. This aspect of the design was inspired by the Cordillera de Apaneca volcanic range but also represents the five member states of the United Provinces of Central America.

The design also includes a Phrygian cap on a staff, a sun in the horizon, and a rainbow arch that is a symbol of peace. The design includes the date of the nation’s independence—September 15, 1821. Outside of the triangle are five blue and white flags that symbolize the Federal Republic of Central America. The flags are held up by wooden war spears which is a nod to the ancestry and heritage of the country. A scroll is located under the triangle and includes the text, “Dios, Union, Libertad,” which is translated into “God, Union, Liberty.”

A green laurel wreath tied with a striped ribbon is included in this design and represents unity. The 14 parts of the wreath represent the Departments of El Salvador.

While these are the main colors of the flag, the coat of arms features several other colors. In addition to blue and white, gold, green, red, and other colors are used to create this unique national symbol.

In the 19th century, Honduras used the triband flag of the United Provinces of Central America. This flag was somewhat similar to the modern flag used today except the color blue was different and no coat of arms was used. A later version was similar but included the coat of arms. The flag was again modified when Honduras was part of the Federal Republic of Central America.

In the 1860s, a different design was used by El Salvador. This design featured five blue stripes and five white stripes. A red canton featured nine white stars. This design was later modified to include 11 stars, then modified again to add an additional star, bringing the total to 12. Another star was added, then the flag was modified one last time in 1877 to include fourteen stars. This flag was used from 1877 to 1912. This flag was unique because it featured another side with the coat of arms.

Finally, the modern design of today was adopted on May 27, 1912. It has since remained unchanged.

The color blue is important in Salvadoran culture because Native American tribes produced indigo plants that were used to create blue dyes. El Salvador was a leading producer in the world during this early time period.

The Salvadoran flag is known as the Tierra de Volcanes Soberbios, which means Land of Superb Volcanoes.

Three horizontal bands of blue, white, and blue with the National Coat of Arms in the center of the white stripe 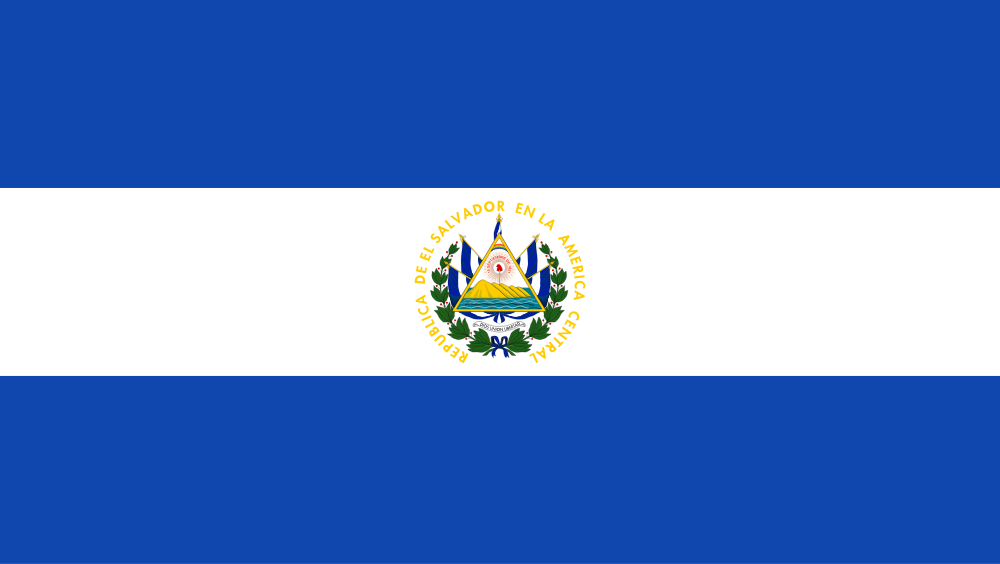