Despite becoming a republic in the 1980s, the flag of Fiji has remained relatively unchanged from the original flags used during the colonial period. The flag features a Union Jack, which is a representation of Fiji’s ties with the United Kingdom.

The flag also features a shield that was derived from the national coat of arms. This design symbolizes the agriculture of the nation, including a cocoa pod, sugar cane, bananas, and a coconut palm. It also features a dove that is a symbol of peace.

The field of the flag, which is light blue, is a symbol of the Pacific Ocean. This body of water is extremely important to the nation for its role in its economy through the tourism and fishing industries.

There are many colors used in the flag of Fiji. The main color, which is used for the field of the flag, is light blue. The Union Jack – which is dark blue, red, and white – is located in the canton area of the flag. Centered on the outer half of the flag is the national coat of arms, which features multiple colors, including red, green, white, and gold.

Since the early 20th century, the flag has remained mostly the same with only slight modifications. The current version was adopted on October 10, 1970. Even after becoming a republic in 1987, the flag remained unchanged. In 2013, Fiji’s Prime Minister announced a plan to change the flag, but the idea was abandoned a few short years later.

The Fijian flag was designed by Tessa Mackenzie.

In a 2015 competition, thousands of designs for a new national flag were submitted. However, as of 2019, plans for a new flag have not come to fruition. 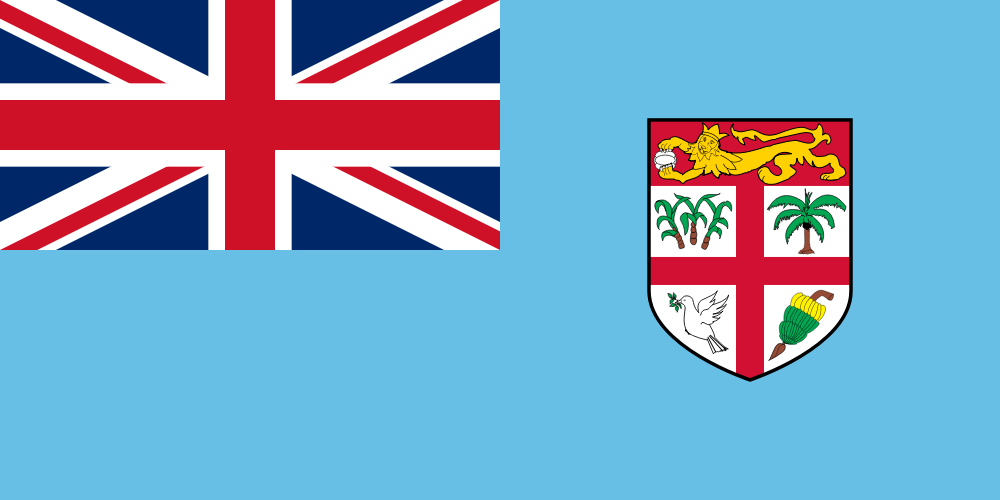