The national flag of Honduras features a horizontal triband design with five stars arranged in an X-pattern in the center of the flag. These five stars represent the five Central American provinces of Costa Rica, El Salvador, Guatemala, Honduras, and Nicaragua. The inclusion of these stars represents hope that one day, the nations may once again form a union. The design of the flag is based on the flag of the Federal Republic of Central America.

The Honduran flag features the same colors and pattern of the flag used by the United Provinces of Central America. The colors of the flag represent characteristics of Honduras, including brotherhood, peace, and purity.

There are just two colors on the Honduran flag. The top and bottom bands as well as the five stars in the center are Cerulean blue. This color of blue represents the Caribbean Sea, the Pacific Ocean, and the sky. The color blue is also a symbol of brotherhood.

The color white is used for the middle band. This color is used to symbolize land between the sea and the ocean. It also represents peace, purity, and prosperity.

The Honduran flag has been redesigned a few times throughout its history, although the design has primarily remained the same. In 1823, Honduras used the flag of the United Provinces of Central America. The Honduran flag of 1839 featured the triband design but did not include the five stars in the center. The color of blue used in this flag was also darker than the Cerulean blue of the modern flag.

In 1866, the design was changed. This flag looked very similar to the flag used today except for the spacing of the five stars. An alternate version of the flag was also available, with the five stars arranged in an arch. These flags were in use until 1898. After that, a new flag was used that featured the triband design and five stars. However, these stars weren’t blue but were instead yellow. This flag was used until 1949, when the current flag design was adopted.

Three horizontal bands of blue, white, and blue with five blue stars on the white band forming the shape of an X 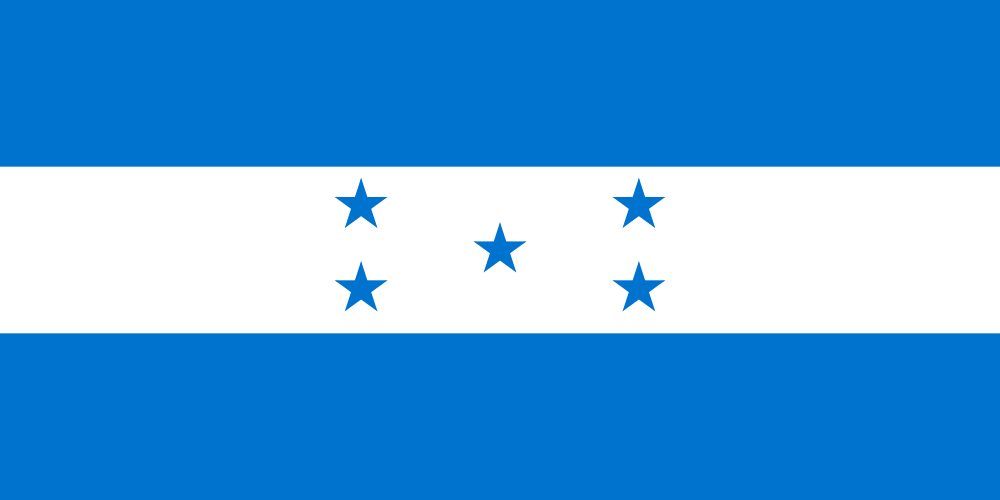