What does the flag of Mexico look like? The Mexican flag is three vertical bands of green, white, and red with the National Coat of Arms in the middle of the white band.

The flag of Mexico features the colors of the national liberation army. These colors were adopted by the country after it gained its independence from Spain. The flag also features the national coat of arms, which has changed several times throughout history. The Mexican coat of arms is based on the Aztec symbol that was used for Tenochtitlan, the area that is now Mexico City. Though the design of the coat of arms has changed over the years, it still features the same basic design of an eagle, a serpent, a cactus and a rock above a lake. This coat of arms is based on the legend that gods told the Aztecs to build a city where an eagle was spotted on a rock consuming a serpent.

The colors of the Mexican flag are red, white and green. These colors were adopted by the country following its independence from Spain. It was the same colors used by the national liberation army during the War of Independence. Although the government has suggested specific colors to be used in the flag, there is no official law as to what shades should make be used. The flag also features the country’s colorful coat of arms in the center, which includes shades of brown, gold, blue and green.

Multiple flags were used throughout Mexico during the War of Independence. The first national flag is thought to be the flag featuring the Virgin of Guadalupe, although this was never the official national flag. After this, many flags were used, including one that was red, white and blue. The current colors of the flag were first seen in the flag of the Army of the Three Guarantees. However, the coat of arms differed slightly. There were multiple variants of this flag was used throughout the years, with an official flag being designated in 1821 and used the next year. The current flag went into use in 1968 and was officially named the nation’s flag in 1984.

A flag similar to the current flag of Mexico was used. However, this flag did not feature the coat of arms and was eventually no longer used as it was deemed to be too similar to Italy’s flag.

When the flag is brought out in front of a crowd, the military personnel of Mexico are expected to salute. When the national anthem is played at any televised event, it is required that the flag be shown on TV through the duration of the song. Mexico celebrates flag day on February 24. The president of Mexico presents the flag bearer of the Olympics with the flag to carry to the host city.

Vertical stripes in Green, White, and Red with the National Coat of Arms 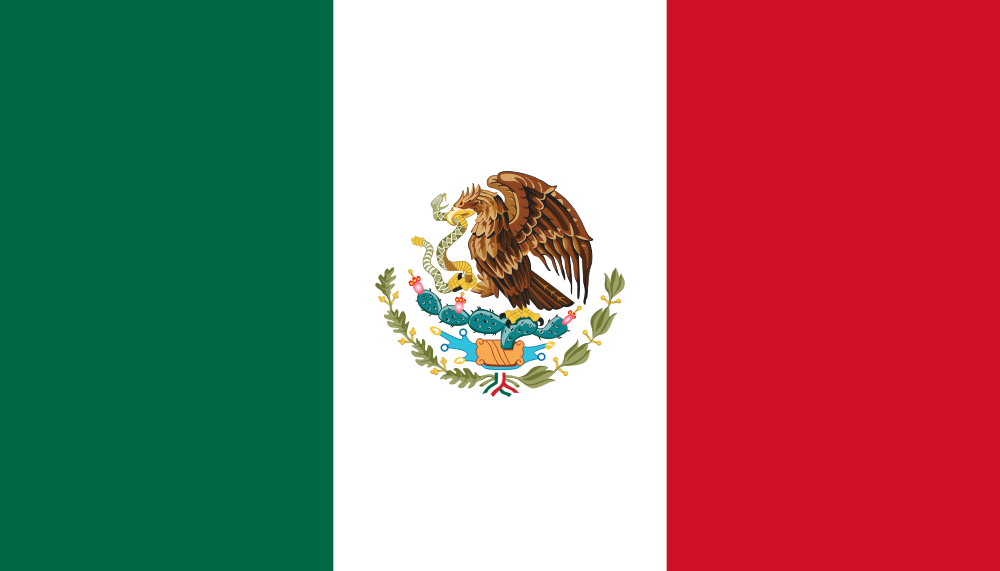