Although Arizona is the sixth largest state in the USA by area, it is the 14th largest state by population size. Since becoming the 48th state to be admitted to the USA in 1912, Arizona has grown rapidly from 200,000 people to nearly seven million today. Much of that growth has come in the past 40 years -- in 1970 there were less than two million people in Arizona.

In terms of preferred religions over the state, 67% Arizonians identify under the Christian faith, with 6% non-Christian faiths rounding out the 27% that have no affiliation with either.

Arizona was acquired from Mexico in 1848 and 1853. It was established as a territory in 1863 from New Mexico Territory, and acquired essentially its present boundaries in 1866. Arizona was admitted as a State on February 14, 1912.

According to the most recent ACS, the racial composition of Arizonawas:

Arizona was admitted to the Union in 1912 as the final state of the lower 48. Arizona's population at statehood was just over 200,000 people, which ranked 45th of the 48 states . In the hundred years since, its population has grown rapidly, consistently posting annual growth rates of over 3%.

Since the most recent official estimate from the US Census in 2015 (6,828,065), we estimate that the population has increased by nearly 100,000. If this rate is sustained, Arizona will surpass 8 million citizens by 2026 (as projected by Arizona Office of Economic Opportunity in 2018), becoming the 12th state to reach this mark.

Although growing at a rate faster than the national average, Arizona's growth rate is declining compared to its past trajectory toward a growth rate of 1.5%. By 2020, Arizona is projected to hit a population of 7,286,000 and to cross the 8,000,000 threshold by 2028.

Some experts believe that Arizona will become a minority-majority state by the year 2027 based on current demographic trends. Beginning in 2003, the number of births to Hispanics outnumbered the number of births by non-Hispanic whites. While this trend continued for several years after that, the trend reversed in 2011. The southern and central regions of the state remain mostly inhabited by Mexican Americans.

The population of African Americans within the state has also grown significantly in recent years, with Phoenix's population in this demographic doubling from 1990 to 2005. Asian Americans also inhabit the state, with the largest subgroup being Filipinos, with over 53,000 recorded during the 2010 Census. 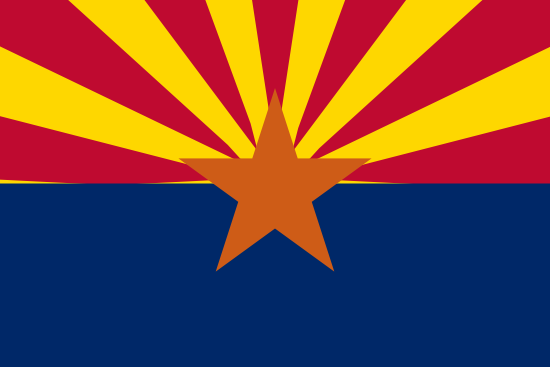 Overall, most of the counties in Arizona have experienced growth between the Census taken in 2010 and the Census Bureau estimates taken in 2015. Greenlee County, located right along the eastern border of the state, has seen the most growth during this time period, posting a 14.27% population increase over 5 years. Trailing behind is Maricopa County, which has experienced 8.95% growth during the same time period. Neighboring Pima County has grown by 7.17%, followed by Yavapai County at 7.17%.

Arizona Educational Attainment by Sex (over 25)

The highest rate of high school graduation is among white people with a rate of 94.32%.

The highest rate of bachelors degrees is among asian people with a rate of 57.23%.

72.86% of Arizona residents speak only English, while 27.14% speak other languages. The non-English language spoken by the largest group is Spanish, which is spoken by 20.44% of the population.

The race most likely to be in poverty in Arizona is Native, with 32.92% below the poverty level.

The race least likely to be in poverty in Arizona is White, with 9.96% below the poverty level.

Arizona Married by Age and Sex