Oklaoma's growth rate is currently 0.84%, which ranks 24th in the country. Over the years, its population has grown steadily to the point where it is edging toward a landmark of 4 million residents in the present day.

As with all states within the US, the nationwide Census of 2010 provides Oklahoma's last confirmed set of population figures. The census revealed that the population of Oklahoma was 3,751,351, which represented an increase of 8.7% on the figures released in 2000.

The southern central state of Oklahoma is the 20th largest in the US by area and was the 46th to enter the Union.

Oklahoma has a fairly low population density that keeps with its ranking in terms of size and population numbers. The total surface area measures 69,898 square miles (181,195 square kilometers) and for every square mile of Oklahoma territory, there is an average of 54.7 people per square mile. This makes Oklahoma the 35th most densely populated state in the country and 20th in terms of size.

Oklahoma has a total of 598 incorporated places, but only four cities with a population over 100,000. 65% of Oklahomans live within the Oklahoma City and Tulsa metropolitan areas, with both being two of the sixty largest cities in the country. Oklahoma City is the largest city in the state with a population of 631,346, while Tulsa follows with 403,505. In these two areas, the population density exceeds 5,000 people per square mile, while the remainder of the state is mostly under 55 people per square mile. When it comes to the most populated counties in Oklahoma, the two at the top of the list are Oklahoma county with 787,958 individuals and Tulsa county with 646,266 residents.

The median age of the population residing in Oklahoma is approximately 36.3 years of age. The ratio of females to males is currently around 50.5% females and 49.5% males across the population.

Oklahoma was acquired by the Louisiana Purchase of 1803. It soon became an area of settlement for various Indian tribes displaced from States farther east, and was known as the Indian Territory although it had various tribal governments rather than a central administration. Many non-Indians also settled in the area. Oklahoma Territory was established from a part of the Indian Territory in 1890 and expanded in 1893; the tribal jurisdictions continued in the remainder. On November 16, 1907 the two parts were admitted as the State of Oklahoma, with substantially the current boundaries. A dispute about the western boundary was settled in Texas' favor by the U.S. Supreme Court in 1930.

According to the most recent ACS, the racial composition of Oklahoma was:

In 1890, Oklahoma had a population that stood at an already healthy 258,657, but substantial increases on those numbers were to follow. Ten years later at the beginning of the 20th century, the figure had climbed by just over 200% to 790,391 and a further significant rise took the Oklahoma population to 1,657,155 in 1910.

Since then, however, the overall trend has been one of modest growth, and the Oklahoma population in 2016 has progressed to the point where it is poised to pass the 4 million mark at the 2020 Census

The US Census of 2020 is likely to indicate further growth within Oklahoma, and it will be interesting to see whether the state can reach its next milestone of 4 million people by that time. According to state projections, Oklahoma's population will reach the milestone of 4 million by 2020, and top 5.5 million by 2075, although projections past 2050 can, at this point, be very inaccurate.

Historically, Oklahoma was home to many American tribes, and this remains a Government sanctioned territory for Native Americans. That fact is reflected in further demographics with a sizeable proportion of Oklahoma residents claiming Native American ethnicity. Oklahoma is home to the second-highest number and percentage of Native Americans among all states in the country. 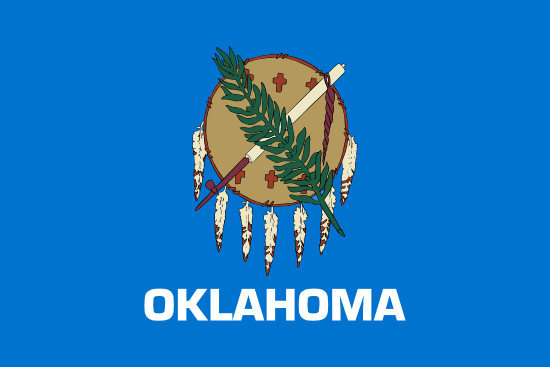 Oklahoma is made up of many counties -- 77 to be exact. When data from the 2010 Census was compared to 2015 Census Bureau estimates, significant population growth and losses were recorded across the state. The highest population growth was recorded in the central region of the state. Canadian County posted a growth rate of 14.65%, by far the highest increase in the state. Its neighboring counties of Oklahoma, Logan, and McClain also posted high population growth rates of 7.73%, 9.34%, and 9.62% respectively. Other counties that also recorded growth include Woodward, Beckham, and Custer.

As far as declining populations, the highest loss came in the westernmost county of Cimarron, which had a loss of 9.81%. Other high declines were recorded in Latimer and Tillman Counties, while smaller losses being seen in counties including Beaver, Coal, and Pittsburg.

Oklahoma Educational Attainment by Sex (over 25)

The highest rate of high school graduation is among white people with a rate of 90.97%.

The highest rate of bachelors degrees is among asian people with a rate of 42.97%.

89.53% of Oklahoma residents speak only English, while 10.47% speak other languages. The non-English language spoken by the largest group is Spanish, which is spoken by 7.26% of the population.

The race most likely to be in poverty in Oklahoma is Black, with 27.47% below the poverty level.

The race least likely to be in poverty in Oklahoma is White, with 12.20% below the poverty level.

Oklahoma Married by Age and Sex