The national flag of Belarus that is currently in use is a modified version of the flag that was used when Belarus was part of the Soviet Union. The flag design features a horizontal bicolor design with an ornament pattern located along the hoist side.

While there isn’t an official ruling on why the colors used in the Belarusian flag are used, President Alexander Lukashenko says that the colors represent freedom, the sacrifice of forefathers, and life.

The ornamental pattern is commonly used in Belarus on garments and woven cloths used during ceremonies and religious services.

The horizontal bands of the Belarusian flag are red and green. The red band is double the size of the green band, which is located at the bottom of the flag. Along the hoist side is a red and white ornamental pattern that was designed by Matrona Markevich in 1917.

Prior to the modern flag that is used in Belarus today, the republic used the Byelorussian Soviet Socialist Republic flag. This flag was adopted on December 25, 1951 before being modified five years later. The flag was very similar to today’s flag, only with the addition of the golden hammer and sickle and red star of the Communists.

This flag was in use until Belarus gained its independence in 1991. A new national flag was adopted in 1995 but was later modified in 2012 to include a thicker ornamental pattern.

Before the Soviet-era flag, there were a number of flags used beginning during the early 20th century. The first flag was the all red flag of the Lithuanian-Byelorussian SSR. The same year, the flag was modified to include gold lettering. This version was used until 1927 before the lettering was modified. The newly modified design was used for ten years, after which the design was again changed to include the hammer, sickle, and red star. This version was used until it was replaced by the Soviet-era flag in 1951.

The Belarusian flag was designed by Mikhail Husyev.

According to a presidential decree, the national flag is to be displayed on a gold colored staff. 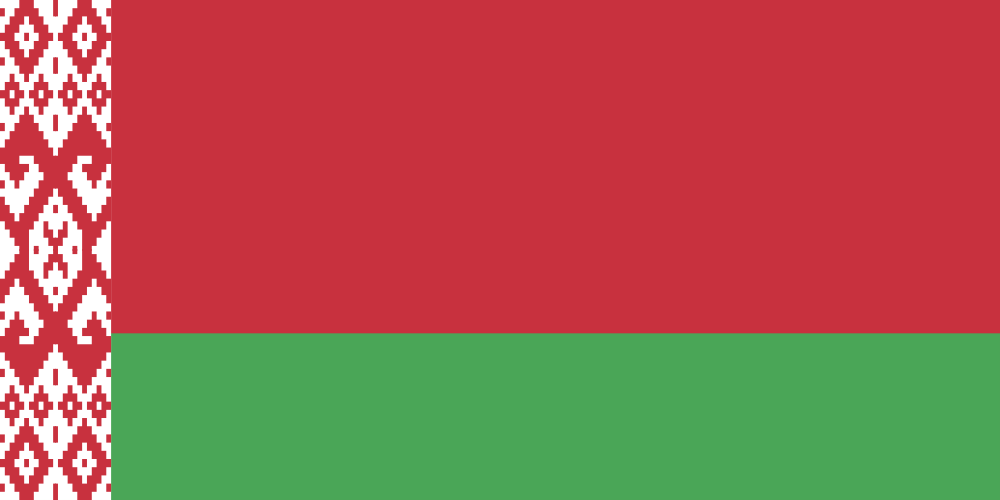