The flag of Jordan features the traditional Pan-Arab colors, which symbolize the unity of the Arab nations. The colors of the flag aren’t all that has symbolism. The flag features a chevron design on the hoist side that connects the three horizontal bands. This chevron pays homage to the Hashemite dynasty and the Arab Revolt.

In the chevron is a seven-pointed red star. This is a symbol of unity, as well as the seven verses of Al-Fatiha. These points symbolize humanity, humility, virtue, national spirit, faith in one God, aspiration, and social justice.

The flag of Jordan features four colors. These are red, black, white, and green – traditional Pan-Arab colors used on the flags of other Arab nations. The horizontal triband features a black band at the top of the flag, a white band in the center, and a green band at the bottom of the flag. The black band represents Abbasid, the white band is a representation of Umayyad, and the green band is a symbol for Fatimid.

The color red is used for the chevron on the hoist side of the flag, which connects the three bands. In the center of the chevron is a white seven-pointed star.

Jordan’s flag was adopted on April 18, 1928. It was based on the flag used in 1917 during the Arab Revolt of World War I. Arabs from Istanbul created the flag based on a poem written in the 13th century. However, this design varied from the modern flag of today because the white and green stripes were reversed. The flag also did not feature the white star that’s on the modern Jordanian flag.

When Abdullah became ruler of Transjordan, he modified the design of this flag by adding the white star. This flag was officially recognized in the constitution in 1928, nearly 20 years before Jordan gained its independence.

Even though it is most commonly believed that the seven-pointed star is based on the seven verses of Al-Fatiha, another common belief is that the star represents the former districts of Syria.

A horizontal triband of black, white and green; with a red chevron based on the hoist side containing a white seven-pointed star 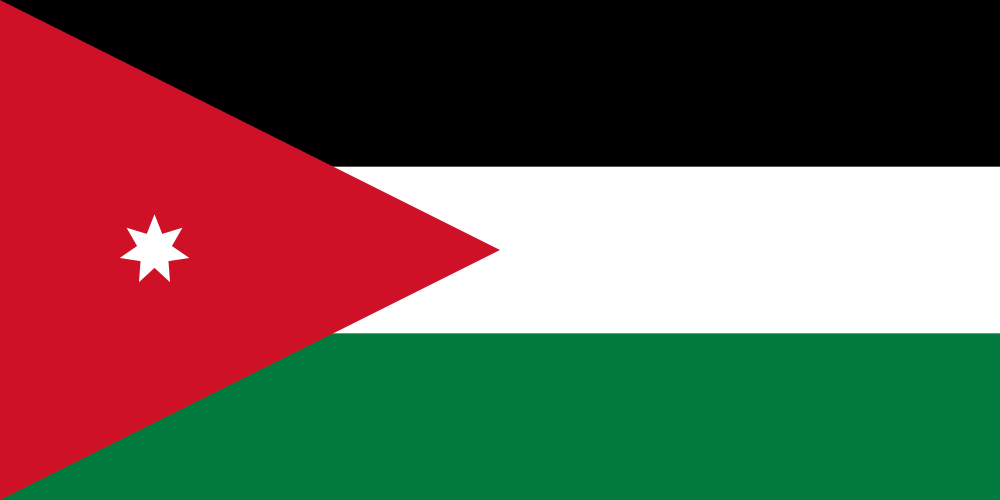