The flag of Libya features a horizontal triband design of three different colors. The colors were inspired by the banner used by the Senussi dynasty of Cyrenaica. The colors are also meant to represent the history and features of the nation. We’ll go into more detail on each color and what it symbolizes in the next section.

In the center of the flag is a white crescent moon and a white five-pointed star. According to a booklet distributed by the Ministry of Information and Guidance of the Kingdom of Libya, the crescent moon was selected to symbolize the beginning of the lunar month based on the Muslim calendar. The star is a representation of hope and the end of darkness in the nation.

The color red was chosen to represent the blood that was shed in the quest for the nation’s freedom. The color black is a symbol of the dark days when the region was occupied by Italy. Finally, the color green is a representation of wealth, prosperity, and the nation’s agriculture.

The crescent moon and five-pointed star located in the center of the flag are both white in color.

After gaining its independence in 1951, the Kingdom of Libya adopted the flag that is currently in use today. This design was inspired by the Senussi dynasty flag which had a white star and crescent moon on a black background. The flag was designed by Omar Faiek Shennib, the Libyan Minister of Defense. It was approved by King Idris Al Senussi.

The flag was used up until 1969. At the time of the Libyan coup d’etat, King Idris was overthrown and the flag was replaced. This flag featured a red, white, and black horizontal triband design of the Arab Liberation flag. This flag was used until the nation joined the Federation of Arab Republics and this flag was adopted and used from 1972 to 1977.

In 1977, a flag featuring a green field with no design was adopted by the Libyan Arab Jamahiriya. This flag was used until 2011.

The tricolor design that was originally adopted in 1951 was once again readopted by the nation on August 3, 2011.

When the flag was no longer in use in 1969, it was adopted by the National Transitional Council.

Red, black, and green horizontal bands with a white crescent moon and star in the center 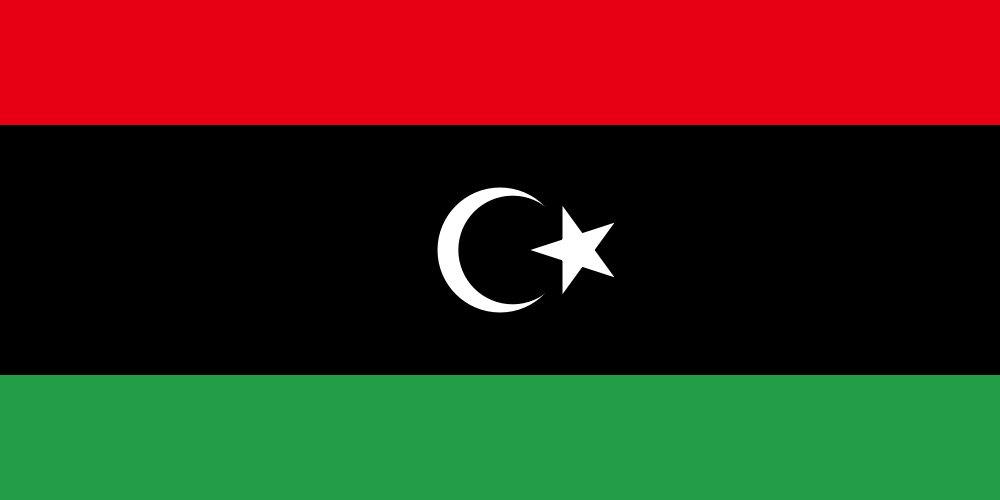