The flag of the Philippines is one of the most interesting, and it also has a few unique symbols to represent the country. The eight-rayed sun represents each of the provinces of the country. The three stars on the flag are representative of the main island groups of the nation. Also, one of the most unique things about this flag is how it can be displayed in two different ways. It the red side is on top, this means that the country is at war. Otherwise, the flag is flown with blue on top.

The Philippines flag features four different colors. There is one horizontal bicolor of blue and red, which meet at a white equilateral triangle. The flag also features a yellow sun with eight rays for each of the eight provinces, and three five-pointed stars in the vertices of the triangle. These three stars represent the island groups of Visayas, Luzon and Mindanao.

The original flags of the Philippines were used by the leaders of the Katipunan revolutionary movement. The original flag featured a red field with three white letter Ks for the full name of the Katipunan. A new flag was later adopted with a white sun featuring the symbol for “ka” in Baybayin. Toward the end of the 19th century, the flag was again modified to change the sun symbol. The symbol for “ka” was removed and a face was put in its place.

It was during the late 19th century that Emilio Aguinaldo came up with the concept for the design of the flag that is used today. The flag was first displayed in 1898. It was during 1899 that the flag was first flown with the red field upwards to indicate that the country was at war with the United States. In 1907, it was illegal to fly the flag of the Philippines, but this law was later repealed in 1919. In 1920, the flag was adopted by law.

The flag was banned again in 1941 but was restored in 1943. Over the years, the design of the flag has been changed slightly, while the modern flag flown today was adopted in 1998.

There have been numerous proposals throughout recent years to change the design of the flag, including the addition of a crescent moon, adding a ninth ray to the sun, and also adding a fourth star to the flag.

The Philippines have two flag days: May 28th which is the nation’s official Flag Day, and June 12th, which is the country’s Independence Day.

The country has a law that requires the flag to be flown at night in certain locations including the Congress of the Philippines and the Supreme Court building. Law also designates that the flag must be illuminated.

Red and blue horizontal stripes with a white equilateral triangle 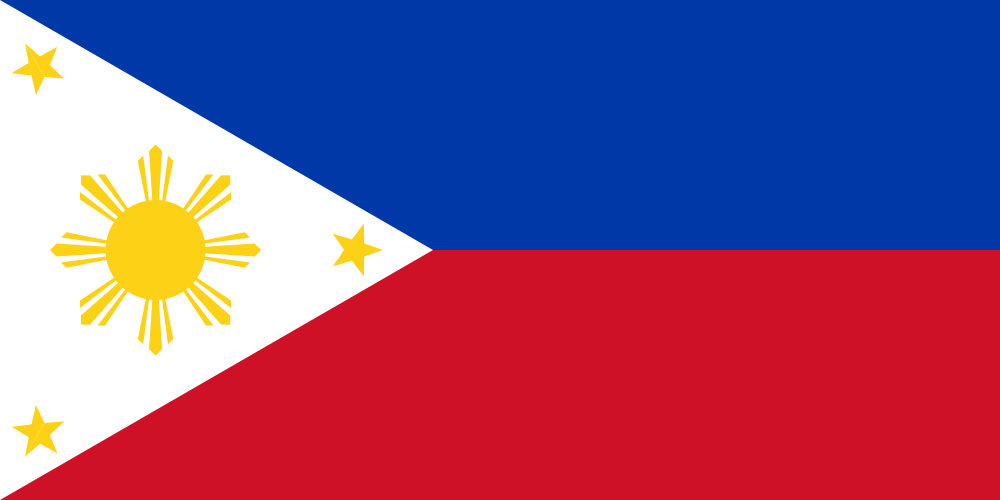