What does the flag of South Suden look like? South Sudan's flag is a horizontal tricolor of black, red, and green with white stripes in between them. There is a blue equilateral triangle cutting through the bands on the left with a gold five-pointed star in the middle. Sudan officially adopted it as the national flag on July 9, 2011.

South Sudan’s national flag is one of the most colorful in the world, and each color represents a different description of the nation. The colors that were chosen for this flag were designed to represent the people of the nation, the bloodshed that occurred during the fight for independence, the agriculture and natural wealth of the country, the peace that came following a struggle for liberation, the Nile River and the unity of the people.

The South Sudanese flag is designed using six different colors. Each color represents different traits and the history of the nation. The color black is used to symbolize the South Sudanese people. The color red represents the struggle for freedom. The color green has many meanings, including the lush land, the agriculture, the natural wealth of the nation and the progress that the country has made throughout its history. The color white represents the peace over the nation following its fight for freedom and independence. The color blue is a symbol for the Nile River, which is considered to be a source of life for the nation. Finally, the color yellow is a representation of the hope, determination and unity

The flag design itself uses these colors as a tricolor of black, red and green with white stripes in between. A blue triangle is located on the hoist side with a yellow five-pointed star in the center.

The nation of Sudan earned its independence in 1956. While the people wanted to have regional symbols, the government opposed the idea because they did not believe that it would foster unity. After gaining its independence, the people of South Sudan felt discrimination from the northerners. This led to a civil war for their independence, and a peace agreement was later signed in 2005. It wasn’t until 2011 when a referendum to give South Sudan its independence was signed into law. The nation became independent on July 9, 2011. The flag was based on a design created during the 1990s when South Sudan was feuding with the north.

The flag of South Sudan is actually older than the country itself. The flag was first adopted in 2005, while the nation gained its independence in 2011.

The colors of the flag of Sudan are similar to the colors used by Sudan and Kenya.

This flag is based upon the flag used by the Sudan People’s Liberation Movement.

Three equal horizontal columns, with black on top, red in the center, and green on the bottom, all separated by a white stripe, a blue triangle on the left edge with a yellow star 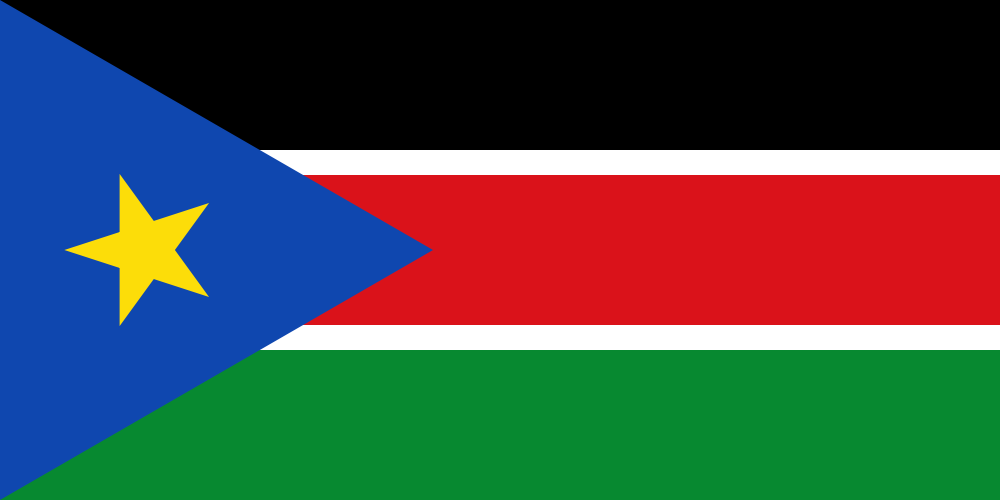