What does the flag of Sri Lanka look like? The Sri Lankan flag is yellow with a green and saffron rectangle on the left and a maroon rectangle on the right with a golden lion holding a kastane sword inside of it. The name of Sri Lanka's flag is the Lion Flag, and it was officially adopted on May 22, 1972 as the civil and state flag and civil ensign.

Sri Lanka has one of the most unique and colorful flags in the world. This flag’s design is also meaningful, with symbolism in every aspect of the design. What stands out most about the flag’s design is the large lion holding a sword. This lion was added to the flag to symbolize the bravery of the Sinhalese. The flag also features four bo leaves in each corner. These leaves represent the four concepts of Buddhism, which include Karuna, Mudita, Upeksha and Metta.

The flag also features two stripes, which symbolize the main minority groups living in Sri Lankan – the Sri Lankan Tamils and the Muslims. The border of the flag represents the unity of the nation.

There are multiple colors used in the flag of Sri Lanka. The lion, border, and leaves are gold in color. The field behind the lion is maroon, while the vertical stripes on the hoist side of the flag are green and saffron.

The lion has always held a significant role in the history of Sri Lanka, and a flag bearing this symbol was used in this country since 486 BC when the first King of Sri Lanka brought a flag featuring a lion over from India. A banner featuring a lion carrying a sword along with sun and moon symbols was first used in the nation in 162 BC and was used until 1815.

The Sri Lankan flag is also known as the Lion flag or the Sinha flag.

Even part of the lion featured on the flag has symbolism. For example, the curly hair represents wisdom, meditation and religious observance, while the beard represents purity of words.

Two vertical columns, a green on the left and an orange on the right, with a red square to the right of the columns, that has a yellow lion holding a sword in the center and a yellow leaf in each corner of the square, all columns and squares outlined in yellow 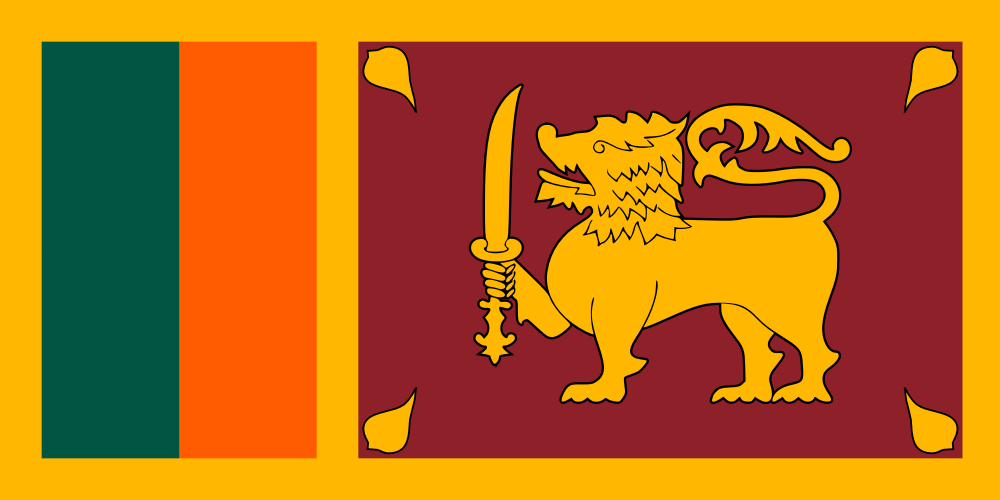