The flag of the United Arab Emirates features a horizontal tri-color design with a vertical band along the hoist. The most important design element of the UAE flag is the significance of the four colors used in the design.

The colors are used to represent different traits, including unity, peace, and prosperity. We’ll explore these colors and what each represents in more detail in the next section. The overarching team of this nation’s flag is the unity of all Arab nations.

The flag of the UAE features four colors. The colors selected for the flag are traditional Pan-Arab colors. The horizontal triband consists of three of those colors: green at the top, white in the center, and black at the bottom. The vertical band at the hoist of the flag is red.

Each color of the flag is symbolic. The color green represents hope and prosperity. The color white symbolizes purity, cleanliness, peace, and honesty. The color black is a representation of strength of the mind. Finally, the color red symbolizes the unity between the Emirates.

The national flag of the UAE was first adopted on December 2, 1971. It was designed by Abdullah Mohammed Al Maainah in the same year. The theme of the flag centers around unity of the Arab nations of the world.

However, this isn’t the first flag that has been used by the nation. Originally, the emirates of the UAE had a red flag with specific banners. During the 19th century, six of the emirates went under British Protectorate rule, and the flag was modified to add a section of white to the hoist.

The flag of Abu Dhabi featured a white field with a white rectangle in the upper left corner. The flag of Fujairah was just red until the 1950s, when the name of the emirate was added in white Arabic calligraphy.

The red banner featured on each of the emirates’ flags is a symbol of Muhammad’s descension.

Green, white, and black horizontal stripes with a red vertical bar on the left side 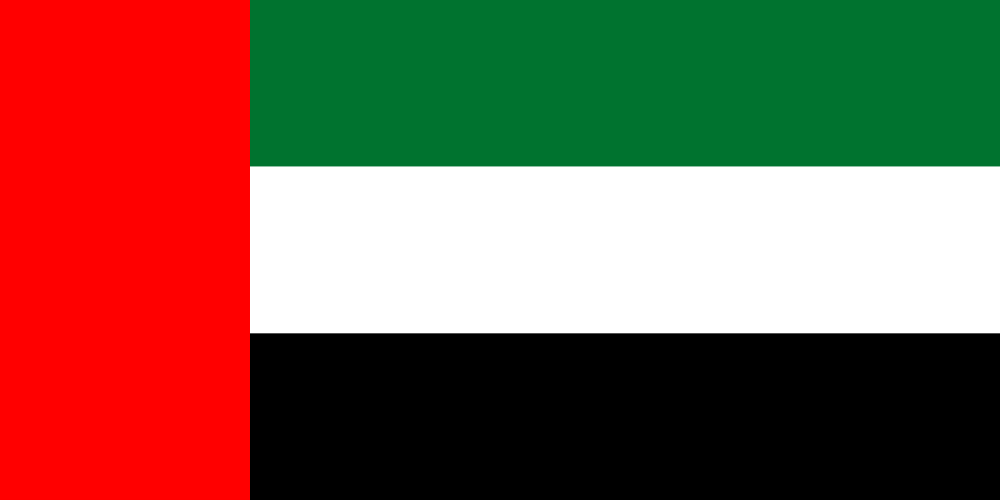