What does the flag of Uzbekistan look like? Uzbekistan's flag is horizontal blue, white, and green stripes separated by thin red stripes, and there are a crescent and three rows of twelve stars in the top left.

There is cultural, regional and political symbolism found in the design of the Uzbekistan flag. The colors are meant to represent peace, purity, water and sky. Nature and fertility are also represented by the flag, while the crescent moon symbolizes the “rebirth” of the nation as an independent country. It is also a symbol of Islam. The thin stripes on the flag are meant to represent the “life force” found within all people. The twelve stars found on the flag are representative of the months of the Islamic calendar and the zodiac constellations.

The flag of Uzbekistan features multiple colors. There is a horizontal triband of blue, white and green. The blue stripe represents both the sky and water. The white is representative of purity and peace. The green color symbolized nature and fertility, and it is also a color of Islam. The flag also features thin white stripes that surround the white band. Finally, the canton features a white crescent moon and twelve white stars.

During the 1950s, the nation that is now Uzbekistan was known as the Union Republic and was under Soviet Rule. During this time, a flag was designed based on the flag of the Soviet Union. The flag featured a red field with a blue stripe through the middle with white edges and the Soviet symbol in the canton.

After the nation declared its independence in 1991, the country went in search of a new flag design. Over 200 entries were received, and the new design was implemented later that year. The modern flag of today was first adopted in November 18, 1991 and has flown in the country ever since.

The design of the current flag was inspired by the Soviet flag used previously.

The crescent moon on the flag represents the Islamic religion, which is observed by 88% of the nation’s population.

Three equal horizontal columns, blue on top, white in center, green on bottom, all columns separated by red lines, white a white crescent and 12 stars in the top left corner of the blue column 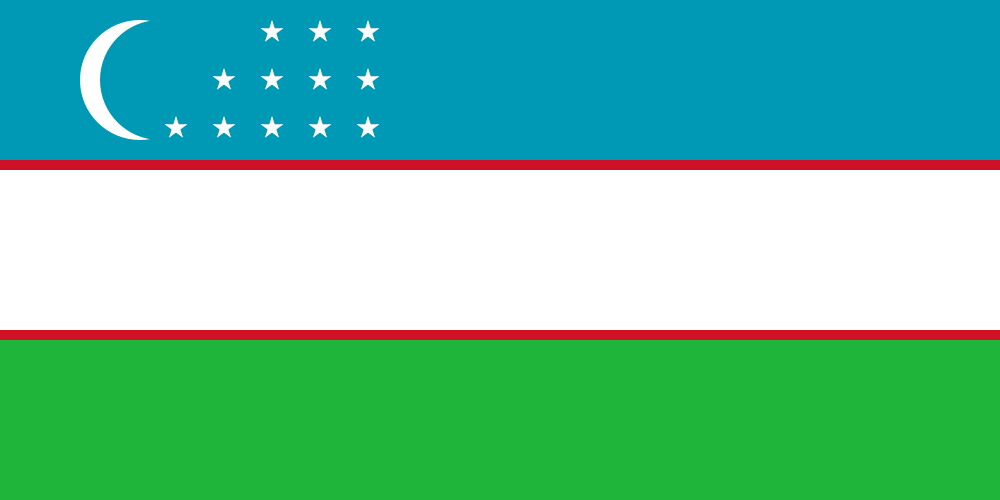