What does the flag of Zimbabwe look like? Zimbabwe's flag is seven horizontal bands of green, yellow, red, black, red, yellow, and green with a black-bordered white triangle on the left. Inside the triangle is a red star and the Zimbabwe bird. The Zimbabwe flag was adopted on April 18, 1980 as the national flag and ensign.

Zimbabwe’s national flag is one of the most interesting in the world. The flag is colorful and features a very unique design. There is a soapstone bird featured on the left side of the flag, which represents a statuette that was found in the Great Zimbabwe ruins. This emblem represents the history of the nation. There is also a red star found on the flag. Officially, this was designed to symbolize the aspirations of the nations, although it is a common belief that this design symbolizes socialism. The colors of the stripes on the flag have great cultural, regional and political significance. The colors represent the agriculture of the land, the mineral wealth of the nation, the blood shed during the struggle for independence, and the race and ethnicity of the Zimbabwean people.

One of the original flags of the nation that is now Zimbabwe was the flag of the British South Africa Company, which featured the Union Jack with an emblem located in the center. This flag was used from 1890 through 1923. The nation that is now Zimbabwe was once known as Southern Rhodesia and during that time, a national flag was adopted. This flag was used from 1923 through 1964. Later, two different flags were used as the national flag of Rhodesia. The first featured a union jack and an emblem on a blue field. In 1968, this design was changed to a vertical triband design. The flag of Zimbabwe Rhodesia was used in 1979 and was put out of use in the same year. Once the nation gained its independence from the United Kingdom, the flag that is currently in use today was officially adopted on April 18, 1980.

Zimbabwe’s flag design is based upon the design of the flag of the Zimbabwe African National Union – Patriotic Front.

The Zimbabwean flag must never touch the ground.

There are no laws prohibiting where the flag can be flown as long as no imprints are made that do not belong on the national flag.

There is, however, a law barring the sell of products featuring the colors of the national flag.

Equal horizontal green, yellow, red, and black stripes with a white triangle outlined in black on the left edge, with a yellow bird and a red star inside the triangle 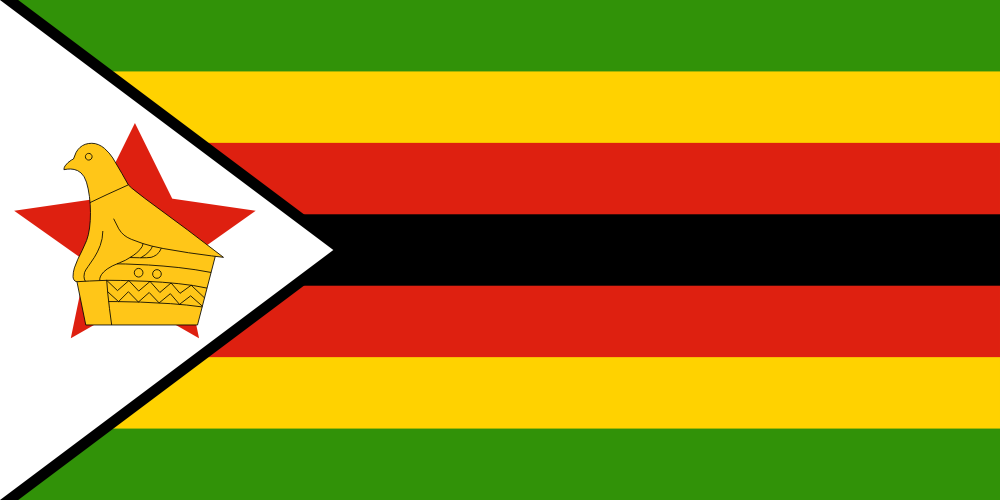