Montana is a vast area of open space, situated in the northwest portion of the United States. It may be the fourth biggest state in the country in terms of sheer size, but its population statistics are a testament to the geography of Montana, most of which is not suitable for large development.

There are only two states in the US that are more sparsely populated than the aptly nicknamed Big Sky Country -- Alaska and Wyoming. In terms of pure population numbers, the state surpassed the 1 million mark according to estimates from the US Census Bureau for 2016. The state has reflected a moderate growth rate of 0.79%, which ranks 26th in the nation.

With a sprawling land mass of 145,552.43 square miles, there are only three bigger states in the US. However, for every square mile of land, there is an average of just 6.86 people (2.65 per square kilometer) and that makes Montana the 48th most densely populated area in the country. Mountain ranges, lakes and national parks all contribute to that figure in a huge area of outstanding natural beauty.

There are few large urban areas in the state of Montana. The largest city is Billings, home to 110,263 people in 2016. Other sizable cities are Missoula (pop: 71,022) and Great Falls (pop: 59,638). Urban areas in Montana are actually growing quite rapidly, while more rural areas are gradually becoming less populated. This is a trend that is common among many states in the country. The most populated counties in Montana are Yellowstone (158,980) and Missoula (117,441) counties.

94.8% of Montana's population speaks English, although there are many other languages spoken in the state, including Blackfoot, Assiniboine, Cheyenne, Plains Cree, Crow, Dakota and Kutenai. This is because Montana has one of the highest Native American populations in the US, with about 66,000 people of Native American heritage. This is the result of many treaties and federal legislation, including one that recognizes the Little Shell Chippewa, a nation of "landless" people in Great Falls recognized by the state but not the federal government. About 63% of these people live off-reservation -- mostly in cities -- with Great Falls having the largest concentration of urban Indians.

According to the most recent ACS, the racial composition of Montana was:

The first census in Montana was held in 1870, just after Montana was formally made a US State Territory (previously it had been a part of Oregon, Washington, Idaho and Dakota territories.) It recorded a population of 20,595. This was relatively small compared to other areas of the country, as the population explosion of the 1800s was slow to reach Montana.

However, increased migration helped to swell those numbers through the end of the 19th century. Just ten years later, in 1880, numbers of just over 20,000 had grown by just over 90% to 39,159 but the biggest spike in the history of Montana’s population was yet to come. The survey of 1890, held just after Montana became a full US state, showed an impressive increase of 265% that took the number of residents to 142,924.

Further increases followed but they began to slow down in the 1900s. In fact, the 1930 Census revealed a fall of just over 2% from the numbers declared ten years earlier. That ‘blip’ aside, steady growth dominated to the point where the population of Montana in 2016 has surpassed the 1 million mark.

Montana's population growth has mainly been concentrated in its seven largest counties, with the heaviest growth in Gallatin County, while the city of Kalispell has seen a growth of over 40% in the last decade. This is expected to continue, as Montana's rural areas will continue to lose people while the urban areas grow.

Montana has a moderate population growth of 0.79%, which is about middle-of-the-road in the United States. Forecasts show Montana's population will grow 14% over the next 30 years, reaching 1.16 million by 2030.

It's also estimated that by 2030, Montana will be one of ten states in the country to have more people over the age of 65 than under the age of 18, and it will be one of only six states to have 25% of its population aged 65 and older, which could impact future growth. 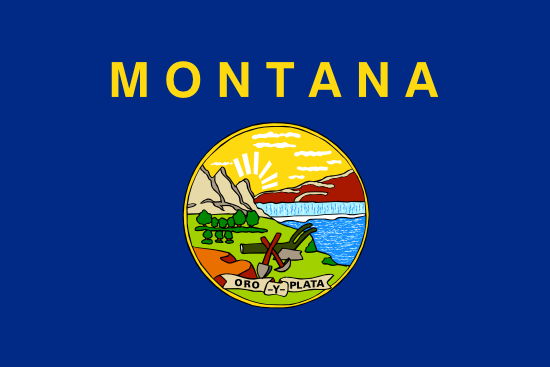 According to 2015 US Census Bureau estimates, there are several counties in the state of Montana that have shown significant growth since the last official Census n 2010. The majority of these counties are located along the eastern border of Montana, with Richland County posting an astounding 22.69% population growth during the 5-year period. Fallon County, located further south, has reflected a population growth of 10.5%, while over to the west, Gallatin County posted 12.7% population growth.

In terms of declining populations, the highest rates were found in the center of the state. Judith Basin County reflected a population decline of 6.69%, closely followed by Golden Valley at 6.34%. Other surrounding counties, as well as counties in the northwest such as Lincoln County and Sanders County also had declining populations but at a smaller rate.

Montana Educational Attainment by Sex (over 25)

The highest rate of high school graduation is among white people with a rate of 94.31%.

The highest rate of bachelors degrees is among asian people with a rate of 49.80%.

95.83% of Montana residents speak only English, while 4.17% speak other languages. The non-English language spoken by the largest group is Spanish, which is spoken by 1.51% of the population.

The race most likely to be in poverty in Montana is Native, with 32.20% below the poverty level.

The race least likely to be in poverty in Montana is Islander, with 4.20% below the poverty level.

Montana Married by Age and Sex