What does the flag of Sudan look like? Sudan's flag is three horizontal bands of red, white, and black with a green triangle cutting through the bands on the left.

Sudan’s flag has significance primarily in the colors selected. The colors red, white, black and green are what is known as “pan-Arab” colors. For years, these colors have been linked to the people of Arab and the Islamic religion. However, there is additional meaning to the colors used in the flag. The red stripe is symbolic of the struggle for independence and the sacrifices of the nation’s martyrs. White represents light, peace and optimism. The black is symbolic of the nation itself, since “Sudan” in Arabic means black. The green is a symbol of Islam, prosperity and agriculture.

The flag of Sudan features four colors. There is a horizontal tricolor of red, white and black. On the hoist side of the flag, there is a green triangle. As previously mentioned, these colors hold their own significance, representing the religion of Islam, the people of the nation, the struggles throughout history, and traits such as peace and prosperity.

One of the first flags used in Sudan was used during the Mahdist War. In 1881, a black flag was used. The stripe in the modern flag of today pays homage to this flag. At the end of the 19th century through the 1950s, Sudan was under the administration of the United Kingdom and Egypt and did not have its own national flag. Instead, the nation flew the flags of the U.K. and Egypt together.

Once the country gained its independence in 1956, Sudan adopted a national flag that featured a tricolor design of blue, yellow and green. This flag was in use until 1970. The blue of the flag represented the River Nike, while the Sahara Desert was symbolized with the yellow stripe, and the farmlands of the nation were represented by the color green. It was in 1970 when the design of the flag was changed. This is the current design that is still in use today.

The flag’s design is based on the Arab Liberation Flag used by Egypt, Syria, Iraq and Yemen.

There are two variant versions of the flags used by the President of Sudan.

Three equal horizontal stripes, red on top, white in middle, black on bottom, with a green triangle on the left side 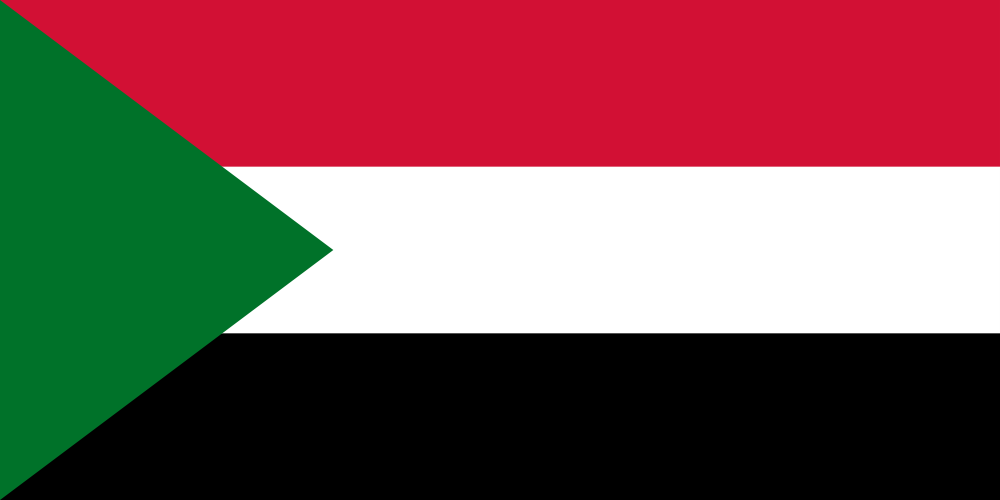