Washington State is situated in the far northwestern corner of the United States, and with a land mass of 71,299 square miles, it is the 18th largest state in the US in terms of surface area.

The US Census Bureau 2015 estimate shows Washington's population has reached 7,170,351, up from 6.72 million recorded during the 2010 census. Washington is currently enjoying a healthy growth rate of 1.27%, which ranks 8th in the country.

In order to gauge any current population within Washington State, it is necessary to refer back to the last nationwide census which was carried out in 2010. At that stage, it was confirmed that there were 6,724,540 people in the state, and that represented an increase of just over 14% on the numbers declared in 2000.

Current estimates now show a population of 7.17 million in the state of Washington, and rapid growth is expected to continue. This population places Washington as the 13th most populous state in the country, but only 25th in terms of population density. Within its total area of 71,299 square miles, there is an average of 101.2 people for every square mile of Washington State territory.

Seattle is the largest city in the state with a population of 684,451, with a density of 7,962 people per square mile. The Seattle-Tacoma-Bellevue metropolitan area has a population of 3.73 million, however, and encompasses nearby cities like Kent, Tacoma, Bellevue and Everett. It accounts for more than half of the state's population. The most populated counties in Washington State are King and Pierce counties with respective populations of 2,188,649 and 876,764

The median age across the state of Washington is 37.6 years of age. In terms of the ratio of females to males, 50.1% of the population is female and 49.9% male.

After a period when Great Britain also claimed it, Washington was definitively acquired in 1846 and was included in Oregon Territory, established in 1848. Washington became a separate territory in 1853, acquired essentially its present boundaries in 1863, and was admitted as a State on November 11, 1889.

The 1850 population is that of Clark and Lewis Counties, Oregon Territory; census coverage extended only to the southwestern part of present-day Washington. In 1860 census coverage included nearly the whole present State, and some persons in present-day northern Idaho and northwestern Montana.

According to the most recent ACS, the racial composition of Washingtonwas:

Like many areas in the far western United States, Washington State began life with a very small population and back in 1850, the population was recorded at 1,201. Ten years later, however, that had increased significantly by nearly 900% to 11,594 and it sparked a population explosion within the state to the extent that by the end of the 1800s, the population had grown to 518,103.

The Census of 1910 revealed that the Washington State population had exceeded one million for the very first time and the pattern throughout the 1900s was one of continued substantial growth.

Growth has continuously progressed through the present day where the population of Washington State in 2016 has surpassed 7 million. The overall picture in the state is clearly one of sustained growth and there is really nothing to indicate that this factor will change at all for the foreseeable future.

Looking at percentage increases for the last few censuses, it is safe to assume that the population of Washington State will be well on its way to another major milestone through 2020, when the population is estimated to surpass 7.5 million.

According to current projections, Washington's population will reach 8.9 million by 2040, with migration contributing 59% of this increase, while the remaining 41% will be contributed by natural increases (or the number of births minus the number of deaths). While 14% of Washington's total population is now over the age of 65, this percentage will climb to 21% by 2040, which will have serious impacts on planning and policy-making for the state as a whole.

Washington has a fairly large Hispanic and Latino population of 12.4%, which may belong to any race. Despite a small overall percentage of the population, the black population of Washington is mostly in the Central District and South End regions of Seattle and Tacoma. 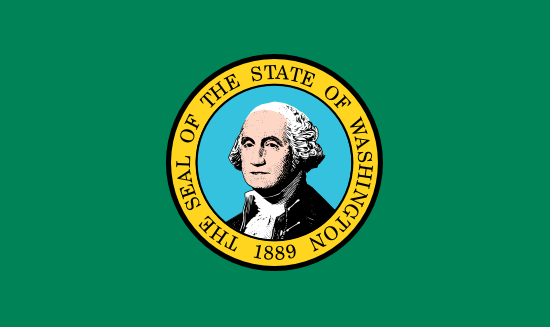 When comparing data from the 2010 Census to estimates taken in 2015 by the US Census Bureau, this comparison shows that the majority of Washington's counties saw increases in their populations. The highest gain of 12.23% was reported in Franklin County, followed by King County's 9.26%. Other counties that had population gains exceeding 5% include Whitman, Benton, Clark, and Snohomish, while other counties such as Whatcom, Pierce, and Douglas had smaller growth rates.

There were a total of five counties that had losses in their respective populations. The highest loss occurred in Columbia County, with a decrease of 3.95%. The remaining losses were recorded in Lincoln, Garfield, Pacific, and Grays Harbor.

Washington Educational Attainment by Sex (over 25)

The highest rate of high school graduation is among white people with a rate of 95.16%.

The highest rate of bachelors degrees is among asian people with a rate of 54.51%.

80.02% of Washington residents speak only English, while 19.98% speak other languages. The non-English language spoken by the largest group is Spanish, which is spoken by 8.53% of the population.

The race most likely to be in poverty in Washington is Native, with 22.04% below the poverty level.

The race least likely to be in poverty in Washington is White, with 8.31% below the poverty level.

Washington Married by Age and Sex