The state of Wyoming is located in the central northwestern sector of the USA. While it is the 10th largest in terms of surface area, it has the lowest recorded population of any state in the Union. It is also the second most sparsely populated. It's currently enjoying a healthy growth rate of 1.13%, which ranks 15th among all 50 states.

This is a very sparsely populated state, and with an average of just 5.85 people for every square mile, only one other state in the entire US -- Alaska -- can boast a less dense population.

The most populated counties in the state of Wyoming are Laramie county and Natrona county with respective populations of 98,327 and 79,547.

The median age of the population residing in Wyoming is approximately 36.8 years of age. The ratio of females to males is currently at 48.9% females and 51.1% males.

Although most of Wyoming was acquired as early as the Louisiana Purchase of 1803, an organized government began with the establishment of Oregon, Nebraska, and Utah Territories (1848-54). Later the area was included in Idaho, Dakota, and Utah Territories until Wyoming Territory was established in 1868 with the present State boundaries. Wyoming was admitted as a State on July 10, 1890.

In 1850 and 1860 present-day Wyoming had only limited census coverage, as part of Utah and Nebraska Territories. In 1870 census coverage included the whole of Wyoming Territory.

According to the most recent ACS, the racial composition of Wyoming was:

From that point up until the present day, the overall growth percentage increases have slowed down, although generally speaking, the picture has been one of sustained, if unspectacular, growth. There was an anomaly in 1990, however, when the census of that year revealed a fall in numbers of 3.4% on those declared ten years earlier.

Further rises were to follow, however, and that has continued to the present day where the population of Wyoming in 2016 exceeds 580,000.

The fact that there was a fall in the population of Wyoming as recently as 1990 makes it a little difficult to predict numbers moving forward. However, recent censuses have indicated a return to sustained, if modest growth and therefore, by the time of the next census in 2020, the population may exceed the next milestone of 600,000.

Wyoming is currently enjoying one of the highest growth rates in the country, in part fueled by natural gas jobs in the area and an unemployment rate well below the country's average. Its growth over the last few decades has been in largely rural counties where natural gas exploration has taken off.

Given its healthy economic environment, open space and high growth rate, its population is estimated to be close to 700,000 by 2025.

Wyoming is one of ten states that has a non-Hispanic white population that is over 90%. The state has one of the lowest populations of African American residents in the nation, ranking 42nd out of 50 states. It also has the 4th lowest percentage of Asian residents. Whether these numbers will change in the future is unknown, although 2011 data showed that almost one-quarter of children under the age of 1 born in Wyoming were classified as minorities. 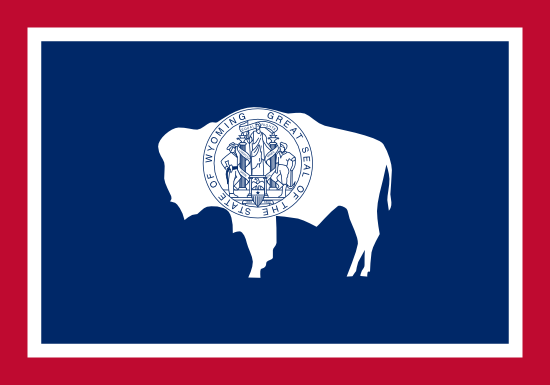 From the time of the last US Census in 2010 to the time that estimates were taken in 2015 by the Census Bureau, the majority of counties in Wyoming experienced increases in their population. Natrona County recorded the highest population gain during this 5-year period, with 8.89% growth, followed closely behind by Teton County with 8.58% growth. Some other counties exhibited lower rates of growth, including Campbell, Laramie, and Lincoln, just to name a few.

A total of six counties in Wyoming recorded declining populations between 2010 and 2015. The highest loss came in Sublette County, with over 3% decrease, followed by Washakie with over 2% decline. Other counties that saw a less significant drop in population counts include Carbon, Goshen, Hot Springs, and Uinta.

Wyoming Educational Attainment by Sex (over 25)

The highest rate of high school graduation is among black people with a rate of 96.23%.

The highest rate of bachelors degrees is among asian people with a rate of 57.52%.

93.04% of Wyoming residents speak only English, while 6.96% speak other languages. The non-English language spoken by the largest group is Spanish, which is spoken by 4.71% of the population.

The race most likely to be in poverty in Wyoming is Native, with 41.3% below the poverty level.

The race least likely to be in poverty in Wyoming is White, with 13.06% below the poverty level.

Wyoming Married by Age and Sex