The 2010 Census marked a milestone for Iowa, as it crossed the 3 million mark. This makes Iowa the 30th most populous state in the US.

Large areas of Iowa are flat and used as farmland and as such, the population density is relatively sparse. Overall, there is a surface area of 56,272 square miles (or 145,743 square kilometers) and this is the 26th largest state in the country in terms of land mass.

With regards to the exact density, average figures show that there are 54.5 people for every square mile. The population center is located in Marshall County in the city of Marshalltown. Iowa now has a predominantly urban population concentrated in these areas, with 61% of the total population living in urban areas by 2000. From 2000 to 2008, urban counties grew 8.5%, while rural counties declined by 4.2%. This trend is expected to continue.

The most populous city in Iowa is Des Moines, with over 210,000 residents, followed by Cedar Rapids (130,405) and Davenport (102,582).The largest county in Iowa by population is Polk County, with over 480,000 individuals counted in the population.

Iowa was acquired as part of the Louisiana Purchase of 1803 and formed part of Louisiana Territory, renamed Missouri Territory in 1812. Iowa became a territory in 1838 and included present-day Minnesota and the Dakotas from the Mississippi River west to the Missouri River. Iowa was admitted as a State on December 28, 1846 with substantially its present boundaries.

Census coverage began in 1840, when it was limited to eastern Iowa, except for two settlements in present-day Minnesota that were included in Clayton County. The northwestern part of the State was not fully covered in the census until 1860.

According to the most recent ACS, the racial composition of Iowa was:

Records relating to the growth of Iowa’s population can be traced back to 1840 when the official US Census confirmed that there were 43,112 people living here. Like most states across the US, however, those numbers had exploded ten years later and an impressive increase of 345.8% took them to 192,214.

Further significant rises occurred for the rest of the 19th century, but by the time the 1900s had rolled in, the growth had started to slow.

In fact, between 1900 and 1910, there was a slight drop in population figures by less than 1%. Although this wasn't a huge amount, population decreases within the US are rare, and Iowa went on to produce a similar set of figures in 1990 when the declared population of 2,776,755 had actually dropped by 4.7% from the numbers confirmed in 1980. Overall, those drops in figures make Iowa’s population in 2016 and the future hard to predict.

After the state's economy bottomed out in the 1980s, Iowa has slowly become more dependent on agriculture. There is still a good mix of finance and insurance services, government services, manufacturing and biotechnology, which has allowed the population of Iowa to increase faster than the United States as a whole.

Population estimates from the U.S. Census Bureau in 2013 showed that seven metro counties in Iowa carried the population growth of Iowa from 2010 to 2012, with Dallas County near the top nationally. Combined, they ranked 14th in the nation in terms of fastest-growing counties, growing 8.8%. This is in keeping with the urbanization trend in the state.

The overall picture is one of growth and as such, the numbers within Iowa should continue rising steadily, with an estimated population of 3.17 million in 2020 and 3.32 million by 2030.

Iowa has been considered one of the least diverse states, with a population that is mostly white. Iowa is one of ten states that have a white population that exceeds 90%. The state has, however, seen a significant increase in its population of Hispanics. Between 2000 and 2014, the Hispanic population increased by over 110%, and future growth is expected to continue so that the state will approach close to half a million Hispanic residents by 2050. 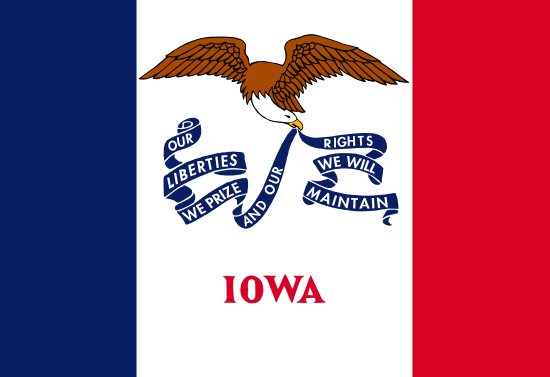 Iowa has exhibited increases in the populations of its counties, as shown in data from the 2010 Census and 2015 estimates from the 2015 US Census Bureau. By far, Dallas County has seen the largest rate of growth during this 5-year period, posting an increase of 20.14%. Neighboring Polk County saw the 3rd highest rate of growth at 8.2%. Further east, Johnson County saw the 2nd highest rate of growth of 9.87%. Some other counties posted smaller but noticeable growth, including Story County with a rate of 7.13%, Sioux County at 3.57%, and Scott County at 3.85%.

There were also some areas that exhibited declining growth between 2010 and 2015. The highest decrease in population was posted in Fremont County, with a decline of over 7%. Other significant decreases were posted in the southern region of the state, including Adams County at 5.71%, Adair County at 5.7%, and Audobon County at 5.53%.

Iowa Educational Attainment by Sex (over 25)

The highest rate of high school graduation is among white people with a rate of 94.56%.

The highest rate of bachelors degrees is among asian people with a rate of 47.56%.

91.63% of Iowa residents speak only English, while 8.37% speak other languages. The non-English language spoken by the largest group is Spanish, which is spoken by 4.12% of the population.

The race most likely to be in poverty in Iowa is Islander, with 55.98% below the poverty level.

The race least likely to be in poverty in Iowa is White, with 12.93% below the poverty level.

Iowa Married by Age and Sex