The last set of confirmed population figures in the United States came with the nationwide Census carried out in 2010. At the time, it was confirmed that there were 4,625,364 people living in the state -- a rise of just over 15% on the figures declared in 2000.

Like many states on the eastern edge of the country, South Carolina is densely populated in comparison to its relatively small size. The state has an overall surface area of 32,020 square miles (82,931 square kilometers) which makes it just the 40th largest in the US.

For every square mile of South Carolina territory, however, there is an average of 153.9 people. That figure makes the state the 19th most densely populated in the country.

Interestingly, South Carolina's metropolitan statistical areas are much larger than they appear based on the central city populations. Because of South Carolina law regarding unincorporated areas around city limits, most city proper populations seem smaller than the actual size of the area.

For example, Columbia, Greenville and Charleston each have urbanized area populations between 400,000 and 550,000, with the metropolitan statistical area (MSA) populations exceeding 60,000. The Greenville-Spartanburg-Anderson area is by far the largest, accounting for 1.4 million of South Carolina's population.

The leading counties in terms of most populated are the two counties of Greenville and Richland, coming in with respective populations of 506,837 and 411,592. Both counties are enjoying steady growth rates as well.

The median age across the population of South Carolina is approximately 38.8 years of age. When we look at the ratio of males to females in the population, 51.5% are female and 48.5% are male.

South Carolina was one of the 13 original States. By the time of the 1790 census it had essentially its current boundaries, with some later adjustments following improved surveys. The census has covered all of the State ever since 1790, except for a narrow strip of Indian lands on the northwestern border, first enumerated in 1820. The 1790 census was not completed in South Carolina until early 1792.

According to the most recent ACS, the racial composition of South Carolina was:

In 1790, the population of South Carolina stood at an already healthy level of 249,073 and ten years later, at the start of the 19th century, those numbers had risen by just under 40% to 345,591. That was a significant rise, although it may not have been quite as substantial as other parts of the country were recording at the time.

The pattern of increases in the population of South Carolina continued to display healthy, if unspectacular, percentage growth and the numbers went beyond the one million mark for the first time in 1890.

In the 1900s, percentage growth slowed down to an extent but the overall picture was one of sustained increases through the end of the century. That has also continued to the present day where the South Carolina population is edging closer to the 5 million landmark in 2016.

Natural growth and net migration in South Carolina is extremely healthy and there is nothing to suggest that this pattern will change in the years leading up to the next census.

Projections currently estimate South Carolina's population will just barely exceed 5 million by the 2020 Census, with a population over 65 that exceeds the national average.

South Carolina has the 5th highest percentage of Black or African American residents in relation to its total population, with the majority taking up residence in the Midlands and Low Country regions. While the state doesn't have a high percentage of Hispanic or Latino residents, it has seen the most rapid growth of any state in the period between 2000 and 2010. During this ten-year period, the state saw a 147.9% growth in its Hispanic population.

The largest ancestry groups in the state are: African American (29.5%), American (13.9%), English (8.4%), German (8.4%) and Irish (7.9%). For much of the state's history, African slaves and their descendants made up a majority of the state's total population, with whites becoming a majority in the beginning of the early 20th century, when thousands of blacks moved to the north. Today, most of the African American population lives in the Midlands and Lowcountry areas. 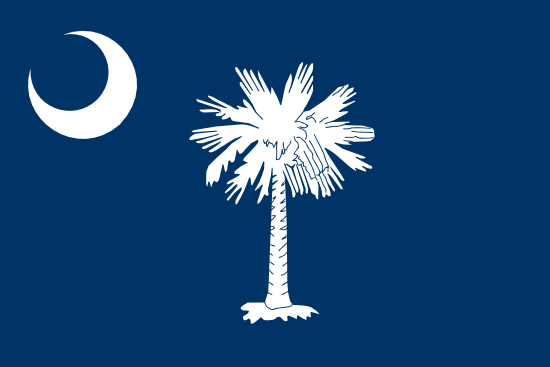 Data from the 2010 Census, when compared to estimates taken in 2015 by the US Census Bureau, shows that the counties of South Carolina have seen significant increases and decreases in population. Multiple counties in the state experienced population growth exceeding 10%, including the highest gain posted in Horry County at 14.3%. Other significant population increases include Berkeley County at 13.34%, Jasper County at 11.65%, and Charleston County at 10.88%, all located in the easternmost region of the state. Counties along the northern border that exhibited significant growth include Greenville, Lancaster, and Cherokee.

Some counties also saw declining populations during this 5-year period. Allendale County's 8.81% loss was the highest in the state, followed by Bamberg and Lee Counties at 6.82% loss per county. Other population declines were recorded in Williamsburg, McCormick, Chester, Hampton, and Spartanburg.

The highest rate of high school graduation is among white people with a rate of 91.53%.

The highest rate of bachelors degrees is among asian people with a rate of 52.6%.

92.64% of South Carolina residents speak only English, while 7.36% speak other languages. The non-English language spoken by the largest group is Spanish, which is spoken by 4.62% of the population.

The race most likely to be in poverty in South Carolina is Hispanic, with 44.71% below the poverty level.

The race least likely to be in poverty in South Carolina is White, with 13.23% below the poverty level.