Uranium is a chemical element with the symbol U and atomic number 92. It was discovered by Martin Klaproth, a German chemist, in 1789. Uranium naturally occurs in soil, water, and rock found on the Earth. It is commercially extracted from uranium-producing minerals like uraninite and is one of the heaviest of all naturally-occurring elements, about 18.7 times as dense as water. Due to this density, uranium has been used as an abundant source of concentrated energy for over 60 years.

Low enriched uranium is most commonly used as fuel for commercial reactors. This type of uranium contains a 235U concentration between 0.711% and 20%, but it is considered “reactor-grade” when the concentration is between 3% and 5%.

Highly enriched uranium is used in nuclear weapons, naval propulsion reactors, and in some research reactors. A 20% concentration of 235U is found in highly enriched uranium. This is the type of uranium that was used in the first atomic bomb, which was dropped on Hiroshima, Japan on August 6, 1945.

Depleted uranium is simply a co-product of the enrichment process, containing 0.711% or less of 235U.

As recently as 1990, 55% of the world’s uranium was produced by underground mines. Although that number shrank over the next decade, in 2000 the new Canadian mines increased it once more. In situ leach (ISL), a mining process that recovers minerals through boreholes drilled into a deposit, has steadily increased its contribution. In 2021, the ISL method accounted for 66% of the uranium production, largely due to Kazakhstan.

Uranium is still obtained using the underground and open-pit method, which accounted for 29% of production in 2021. The remaining 5% of production occurs as a byproduct. 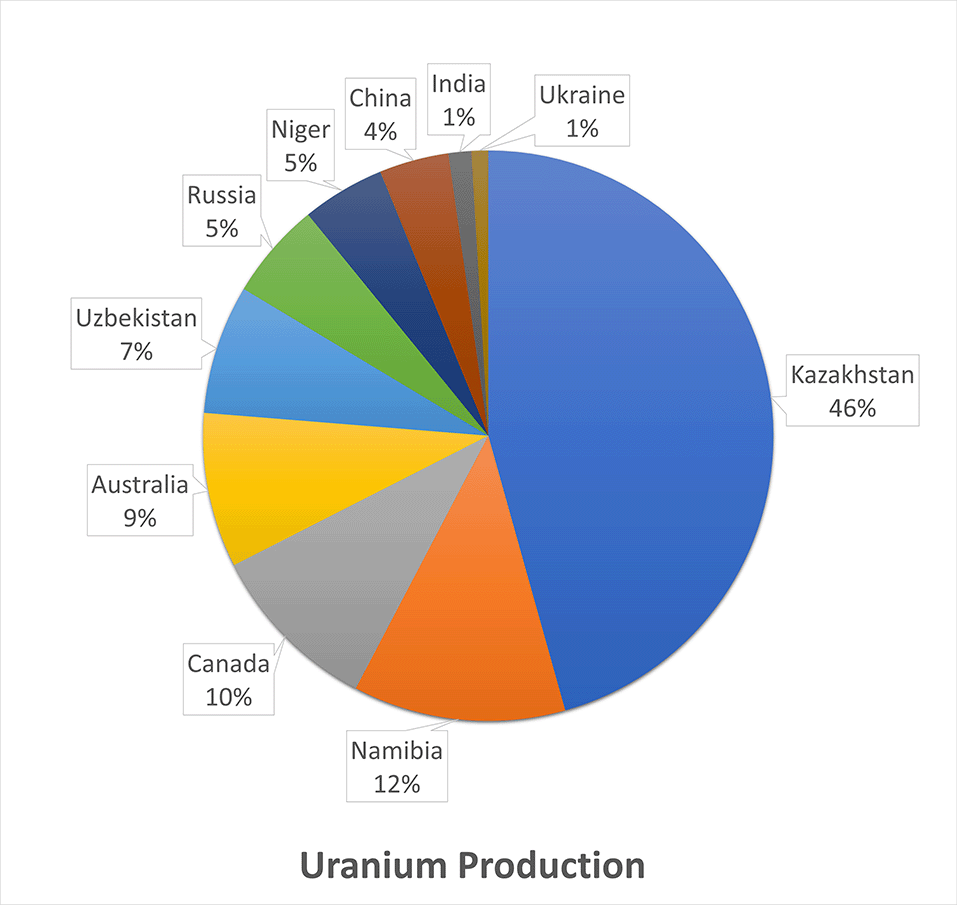 In 2021, 20 countries produced 77%, 48,303 tons, of the world’s uranium. Kazakhstan, Canada, and Australia alone produced three-fourths of the world’s production from their mines.

The following countries are the top producers of uranium, based on 2021 figures:

Global uranium production decreased to the lowest level in 2020 due to COVID-19 mine closures. While production has increased, clean energy sources have caused the demand for uranium to grow disproportionate to its current supply. The depletion of Cold War stockpiles of uranium has put a further strain on production. It is forecasted that uranium mining will not meet the reactor demands for at least 15 years.