Based on current population estimates, there are 94.4 people per square mile (36 per square kilometer) over a total surface area of 52,420 square miles, which ranks Alabama 27th in population density in the United States.

Alabama has a median age of 38.6 years for the overall population in 2018, with gender percentages currently at 51.5% Female and 48.5% Male (see chart further below).

A large majority of Alabamans - 86% - associate themselves with any variation of Christianity, the remaining 12% are unaffiliated to a particular religion in general.

Most of present-day Alabama was part of Georgia until the south-central part was included in Mississippi Territory, whose establishment was authorized by Congress in 1798 and agreed to by Georgia in 1802. In 1804, Mississippi Territory was expanded to include the rest of Alabama except for the Gulf Coast portion, which was added in 1812 although still in dispute with Spain until 1819. Alabama became a territory in 1817, and was admitted as the 22nd State on December 14, 1819 with substantially its present boundaries (Encyclopedia of Alabama, 2018).

According to the most recent ACS, the racial composition of Alabama was:

Further substantial population growth was recorded throughout the 1800s, and although the larger increases had settled down by the start of the next century, growth has continued to be recorded at every following census.

Overall, like most of the US, Alabama’s growth has been on a reliable upward trend, but it’s also been a little unremarkable. Further growth at its current rate will bring the population of the state to nearly 5 million by 2020.

Alabama's population has grown considerably but rather than this being a steady growth, the increase in citizens has been quite variable in recent years. For example, between 1970 and 1980 the population grew by an impressive 13.1% but in the ten years that followed, a mere 3.8% rise was recorded.

Much of this growth can be attributed to the influx of major metropolitan areas, such as the city of Birmingham and the counties of Baldwin (16%), Lee (14%), and Limestone (13%). Jefferson County remains the top populated county with a total current estimate of over 650,000 and a growth rate of .17%.

Alabama has one of the largest populations of African American residents in the United States. With over 26% of the population identifying as black or African American, this state ranks 7th when compared to the other 49 states plus Washington D.C. This large population is a result of slaves that were brought to the region, which was known as the "Black Belt." Following the abolishment of slavery after the Civil War, many African Americans settled in this region to work in agriulture.

Alabama has a very low percentage of residents that identify with two or more races -- accounting for just over 1% of the population. This puts Alabama in 48th place when compared to other states. It also has a lower population of Asians and Hispanics than the majority of other states, while its population of whites and American Indians fall about squarely in the middle when compared to other states. Alabama did, however, see 145% growth in its Hispanic population between the years 2000 and 2010, which led to a total population increase of 27.7% from 2000 to 2009.

While there is a high percentage of white residents, the median age of whites is 41.2 years, according to data from 2010. Hispanics and African Americans have median ages of 24.8 and 32.2 years, respectively, which could indicate a change in future demographics. 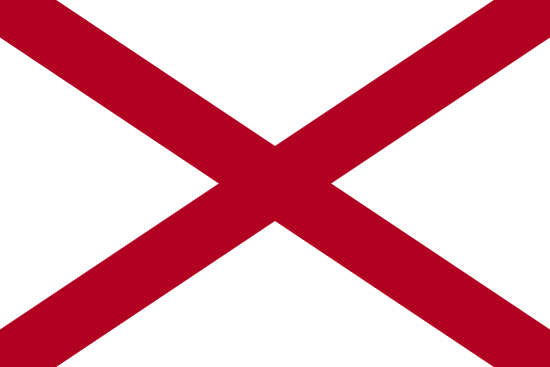 Alabama's easternmost county, Russell County, is experiencing the most rapid population growth in the state, increasing by 11.94% since 2010. Lee County, located directly north of Russell County, has experienced similar growth of 11.51%. To the south, Baldwin County has seen population growth of 11.2%, while Limestone County to the north has also experienced growth that exceeds 10%.

Some of the state's central counties, including Perry, Dallas, Lowndes, Macon, Coosa, and Greene, have seen declines in population since 2010, with Macon County topping the list with an 11.33% decline since 2010 based on 2015 US Census Bureau estimates. Many of Alabama's western counties have also seen declines, including Sumter, Choctaw, and Washington located on the western border.

Alabama Educational Attainment by Sex (over 25)

The highest rate of high school graduation is among islander people with a rate of 92.24%.

The highest rate of bachelors degrees is among asian people with a rate of 51.27%.

94.71% of Alabama residents speak only English, while 5.29% speak other languages. The non-English language spoken by the largest group is Spanish, which is spoken by 3.32% of the population.

The race most likely to be in poverty in Alabama is Hispanic, with 57.57% below the poverty level.

The race least likely to be in poverty in Alabama is White, with 15.29% below the poverty level.

Alabama Married by Age and Sex