The last confirmed set of population figures date from the countrywide census of 2010 when it was declared that there were 9,883,640 people living in Michigan. Those figures from 2010 represented a small loss of less than 1% compared to the numbers declared at the 2000 census.

In 2015, it was estimated by the US Census Bureau that the population had risen to 9,922,576. This reflects a less than 1% increase in population since the 2010 Census, which puts Michigan in 45th place in terms of population growth.

Situated in the heart of the Great Lakes, Michigan is one of the largest states in the US both in terms of land mass and population.

With a total land mass of 96,716 square miles, (250,493 square kilometers), Michigan is the eleventh biggest state in the USA by area. The land is fairly densely packed, although not exceptionally so -- for every square mile of Michigan territory, there is an average of 174 people (67.1 per square kilometer). Those figures leave Michigan ranking 18th in terms of population density.

The largest city in Michigan is the Motor City, Detroit. The 2010 census confirmed that it was home to 713,862 people. This number has decreased to just over 677,000 according to 2015 estimates. If you take a look at the population of Detroit, it’s clear that this is where much of the state’s demographic problems lie. At its peak in 1950, there were 1.85 million people living in the city. In 2016, that number has declined by over one million people. Many of those leaving the city are actually not moving far -- they move out toward the suburbs. But following the city's bankruptcy filing and urban decay, it’s likely that some are packing up completely and moving out of state, which doesn’t help the state’s overall population figures.

The median age of the population in Michigan is 39.5 years of age. The gender ratio is approximately 50.8% female and 49.2% male.

Michigan was part of the Northwest Territory established in 1787. When Indiana Territory was created in 1800 it included the west half of lower Michigan and nearly all of the Upper Peninsula, leaving the remainder of the present State in the Northwest Territory until 1802, when the eastern portion also became part of Indiana Territory. Michigan Territory was established in 1805, but nearly all the Upper Peninsula remained in Indiana or Illinois Territories. In 1818 Michigan Territory's boundaries were extended to include the rest of the Upper Peninsula and all of present-day Wisconsin and northeastern Minnesota. In 1834 the Territory was expanded still further to stretch to the Missouri River, including the rest of Minnesota, Iowa, and the eastern Dakotas. Michigan Territory included a northern strip of Indiana until 1816, and it also governed a narrow strip of what is now northwestern Ohio which was claimed by that State. This was ceded to Ohio in 1836, and Michigan was admitted as a State on January 26, 1837 with essentially its present boundaries.

In 1790 the Northwest Territory had no census coverage. In 1800 coverage of the present State included only the Detroit area (Wayne County, Northwest Territory) and some persons at "Machilamackanack," Indiana Territory. Coverage in 1810, 1820, and 1830 expanded in the Lower Peninsula and included population in the strip that was ceded to Ohio in 1836. The 1820 and 1830 censuses also included some settlements in present-day Wisconsin, shown under that State. The 1840 census covered all parts of the State.

According to the most recent ACS, the racial composition of Michigan was:

In 1800, the population of Michigan was declared at 3,757 and over the next 25 years, the numbers grew at a slow but steady rate.

In 1825, however, a new route into Michigan was carved out -- courtesy of the Erie Canal -- and this brought an influx of farmers, merchants and other settlers into the state. The development had a clear effect on the population, and in 1830, numbers had swelled to 28,004, which was an increase of over 275% when compared to the 1820 Census figures.

The biggest Michigan population spike was yet to come, however, and just ten years later in 1840, numbers had exploded by 658% to a new high of 212,267. More significant increases were to follow, although none quite as mind-blowing as the growth from the 1830s. By the start of the 20th century, the census of 1900 showed that the population of Michigan had grown to 2,420,982.

Similar rapid growth continued throughout the 20th century (during the pre-war years, growth was regularly at 30% per decade), fueled by the growth of the auto industry in Detroit. By the end of the century, it had started to slow down to the point where, at the last census, the first population decrease in Michigan's history was recorded.

According to the 2010 US Census, Michigan was the only state in the country to see a population drop over the last decade, which is mostly caused by the sharp decline in the state's auto industry, which has indirectly led to the bankruptcy declaration from the city of Detroit in 2013. The state's labor force has remained heavily dependent on the stagnant US auto industry, and Michigan's declining population runs against regional trends.

Some economists are hopeful that Michigan can push for new tax incentives to encourage new business in the state, but only time will tell how long it takes Michigan to rebound from what has been a bad decade.

The next Census in 2020 is going to be difficult to predict -- it's quite possible that there will be a continued slow decline in population. Alternatively, if the state's government tries to boost immigration and business growth, a change may occur and there could potentially be a slight rise in population. It is estimated that the total Michigan population will grow 7.6% from 2000 to 2030, adding an additional 755,728 people to the population by the 2030 Census.

A large majority of the diverse population in Michigan is Caucasian, with ancestries that include German, Belgian, British, Polish and Irish. The Upper Peninsula of Michigan has a fairly large population of people of Scandinavian, especially Finnish, descent, while Western Michigan has a notable presence of Dutch residents, which is the highest concentration of any state.

African Americans, who came to Detroit and other northern regions during the early 20th century, still represent a large majority of the population of Detroit and nearby areas like Flint. The state ranks 14th in terms of the percentage of African American residents, according to data from the 2010 Census. Meanwhile, Southeast Michigan, particularly Dearborn, has a great deal of people of Middle Eastern descent, with a large population of Arab people. 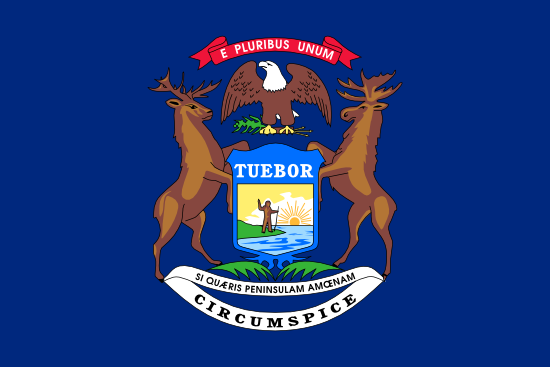 When evaluating Michigan's population by county, the state as a whole saw a balance of increases and decreases in population from 2010 to 2015. The highest increases in population by county were between 5% and 6%. Ottawa County along the state's western border posted the highest population increase at 5.99%. Just east of Ottawa County, Kent County had the 2nd highest rate of growth at 5.54%, while heading north finds the 3rd highest rate of growth during the 5-year period in Grand Traverse county (5.37%). Other counties saw smaller rates of population growth, such as Oakland and Marquette Counties.

The Michigan County that saw the biggest population decline between 2010 and 2015 is Ontonagon County, recording a 10.94% decrease. Gogebic County, just south of Ontonagon, saw a decline of almost 6%, while Montmorency County located more centrally also experienced a decline of 5.28%. The eastern border of Michigan saw mostly declines in population, including reduced populations recorded in Huron, Wayne, and Alcona Counties.

Michigan Educational Attainment by Sex (over 25)

The highest rate of high school graduation is among white people with a rate of 92.97%.

The highest rate of bachelors degrees is among asian people with a rate of 64.27%.

90.26% of Michigan residents speak only English, while 9.74% speak other languages. The non-English language spoken by the largest group is Other Indo-European, which is spoken by 2.95% of the population.

The race most likely to be in poverty in Michigan is Multiple, with 43.59% below the poverty level.

The race least likely to be in poverty in Michigan is White, with 14.40% below the poverty level.

Michigan Married by Age and Sex