Cambodia, formerly the Khmer Empire, is located at the southern region of the Indochina Peninsula in Southeast Asia. Cambodia is currently the 71st most populous country in the world with an estimated 2020 population of 16.72 million, an increase from 2013's estimation of 14.9 million.

Only 20% of the people in Cambodia live in urban areas, and there aren't many large cities. The largest city is the capital city of Phnom Penh, with a population of 1.5 million, and 2.2 million in the metropolitan area. Phnom Penh is the country's economic and trade center and is presently growing at a faster rate than the city's resources allow for. The next largest city is Battambang, with a population approaching 200,000. There are a few other smaller cities in Cambodia with populations approaching 100,000 including Ta Khmau, Serei Saophoan, Siem Reap, and Kampong Cham.

The demographics of the country are very much influenced by the civil war and later genocide, and 50% of the population is under 22 years old. It also has the most female-biased sex ratio in the region.

Khmer is the official language of Cambodia, coming in with 97% of the population using it on a regular basis, with other languages at only 3%.

Over 95% of the population practices Theravada Buddhism, the official religion, with an estimated 4,400 monastery temples in the country. Islam is the main religion of the majority of Malay and Chams minorities in the country, while most Muslims are Sunnis. There are approximately 300,000 Muslims in Cambodia, with about 1% identified as Christian.

The quality of life in any nation is heavily influenced by numerous factors. These include healthcare, education, and cleanliness among a plethora of other available data. The current median age of the total population is 25.3 years of age, with a total life expectancy of 64.9 years of age. In the healthcare sector, 5.7% of the GDP is directed toward health resulting in a meager .14 physician density per 1,000 residents and a hospital bed availability of .8 beds per 1,000 individuals within Cambodia. There is a fairly high infant mortality rate within the nation. Only 75% of the country has improved access to drinking water and only 42% of the population has access to improved sanitation facilities as well.

Cambodia became a protectorate of France in 1863, and the French maintain their hold until World War II when Japan occupies the country. When the war ended, the French presence was reimposed, and Cambodian communists began to fight against them for independence, which was eventually gained in 1953. By 1965, Cambodia sided with the Vietnamese against the United States, and the war was brought onto Cambodian soil. Their involvement in the war lasted until the late 1980s, by which point hundreds of thousands had become refugees.

The rate of change in the population was all over the place during most of the 1900s, due to all of the wars and conflicts that the country was a part of, but things have stabilized considerably since the turn of the century with the growth rate remaining close to 1.5% annually. This rate of growth is pretty healthy and sustainable, increasing the population roughly a quarter-million per year.

How Many People Live in Cambodia? 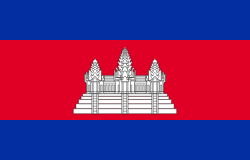 Cambodia is currently experiencing a healthy 1.8% average population growth. By 2020, the country is expected to hit 16.9 million people.