Morocco, officially the Kingdom of Morocco, is the most western of the North African countries with an alternative Arabic name that translates to "The Western Kingdom."

The country has an area of 446,550 square kilometers with an estimated 2020 population of 36.91 million, up from 2013's estimate of 32,649,130. Morocco's population currently ranks 40th in the world. This culminates in an overall population density of about 81 people per square kilometer. Additionally, Morocco is the only African nation to have both Atlantic and Mediterranean coastlines, with a total of 1,835 kilometers of coastline.

The majority of Morocco's population lives to the west of the Atlas Mountains, a large range that protects the country from the Sahara Desert.

The commerce center of the country and the most populous city is Casablanca with more than 3,000,000 total residents. However, the political capital is Rabat, home to 1.4 million citizens. Other major cities include the gateway city of Tangier, the religious center of Fez and the tourist center of Marrakech. The urban population of Morocco was 58% of the total population as of 2010, with a rate of urbanization at 2.1% annual rate of change.

Most of the estimated 100,000 foreign residents in Morocco are also French, while France is home to the largest concentration of Moroccan migrants outside of Morocco. A percentage of the population is descended from colonists, working mostly for large European countries, while others settled in the country. Before its independence, Morocco was home to more than 500,000 Europeans.

Nearly 99% of Moroccans are Sunni Muslims, primarily of Arab-Berber, Arabized Berber, Berber and Niger-Congo ethnic background. The country itself was inhabited by Berbers since at least 5,000 years ago, while Arabs conquered the land that later became Morocco in the 7th and 11th centuries, when the area was inhabited mostly by indigenous Berber and Romano-Berber peoples. Arabs and Berbers currently account for around 99.1% of the Moroccan population.

While the indigenous Berbers, though mostly Arabized, still make up the majority of the population, there is a rather sizable population that identifies as Haratin or Gnawa, black or of mixed race. The Jewish minority of Morocco, which numbered as high as 248,000 in 1948, has decreased significantly with a small population estimated at 6,000 as of 2010.

The framework of the Moroccan government is a parliamentary constitutional monarchy, meaning that there is a prime minister in charge of both the executive and legislative branches of government.

Morocco became independent from French and Spanish influence in 1961, at which point they had their first general elections and elected Hassan II as king and Morocco experienced their greatest rate of growth about 3% during that time. But the Spanish enclave returned in 1969, and more fighting ensued. This was an ongoing struggle that plagued the country for the remainder of the 20th century, in part leading to the steadily decreasing rate in growth.

Morocco has a birth rate of 18.73 births per 1,000 people, placing it 101st in the world. Meanwhile, its death rate stands at 4.78 deaths per 1,000 people in 2013, ranking 195th in the world. Despite these unremarkable numbers, Morocco has long been a home to refugees- contributing it its fairly steady growth rate. Presently the growth rate is 1.23%.

How Many People Live in Morocco? 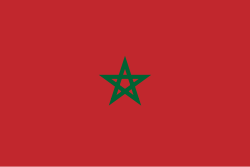 The population growth rate of Morocco is currently 1.04% annually, which has been climbing steadily for the past few years after two decades of decline. While the country still hasn't reached the growth rate of the 1980's or 90's, it's expected to continue its climb. Over the past 50 years, Morocco's total population has changed 180% and has risen year-over-year for over a decade.

Morocco remains a demographically young country that, combined with a fertility level above the replacement level, means the population should continue to grow in the decades to come, although not at great speed. It's projected that Morocco will have a population of about 42 million by 2050.