Bangladesh is a large and heavily densely populated country in South Asia, bordering Burma, India, Nepal and Bhutan. Bangladesh has an estimated 2020 population of 164.69 million.

Bangladesh has an estimated 2020 population of 164.69 million, up from the 2013 estimate of 156.5 million. This makes Bangladesh the 8th most populous country in the world.

The capital and largest city of Bangladesh is Dhaka, which has a population of 14.4 million and a density of 19,447 people per square mile (50,368/square mile). The city has a metro population of more than 7 million. Dhaka is often called the Rickshaw Capital of the World with more than 600,000 cycle rickshaws on the roads every day. The next-largest city is Chittagong, with a population of 2.6 million.

The last official census in the country was carried out in 2011. The Bangladesh population stood at 142 million while an approximation from the CIA in July of that year indicated that numbers were more likely to be significantly higher at 158,570,535.

98% of the Bangladesh population are ethnic Bengalis with the remaining 2% made up from Biharis and other ethnic tribes. Minorities in Bangladesh include indigenous people in northern Bangladesh and the Chittagong Hill Tracts, which have 11 ethnic tribal groups such as the Chakma, Tanchangya, Kuki, Bawm and Marma. The Mymensingh region is home to a large Garo population, while North Bengal has a large population of aboriginal Santals.

Life expectancy in Bangladesh is currently at 73.4 years of age, with an overall happiness ranking of 115 out of all other countries with recorded data. The accessibility of clean water and improved sanitation is still struggling with respective numbers of 13.1% struggling for clean water and 39.4% struggling to access sanitation. Only 72.8% of the population over 15 years of age is literate, with a GDP expenditure of only 2.5% on education.

Bangladesh gained its independence from Pakistan in 1971 and a nationwide census at the time confirmed that there were 71 million people living here. In 1980, the Bangladesh population had grown to 90.4 million and similar rises have been recorded on a decade by decade basis ever since.

The nationwide census in the country took place in March of 2011 and preliminary results claimed that the population of Bangladesh at the time was 142.3 million. This was immediately disputed by the UN and was subsequently dismissed by the Bangladesh authorities themselves.

Through the 1960s and 1970s, the birth rate in Bangladesh was among the highest in the world but that started to slow down considerably in the 1980s. The fertility rate is now at 2.4 children born per woman. Bangladesh has a fairly young population with 34% aged 15 and younger and just 5% aged 65 and older.

The rate of growth has been slowing steadily for quite a while, and that trend is expected to continue further into the 21st century. The country is currently growing at an annual rate of around 1%, but this is expected to halve by 2040. Bangladesh is expected to reach a population of 170 million by 2020, and 186 million by 2030.

How Many People Live in Bangladesh? 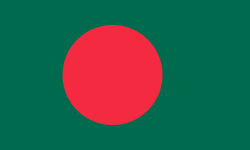 Census figures are clearly hard to obtain, but the current UN projections have Bangladesh's population growing until 2053, when it will hold an estimated 202.7 million people.