Barbados is a sovereign island nation in the Lesser Antilles with just 431 square kilometers (166 sq mi) of land area. The country was claimed for Spain in the late 15th century before being taken by English in the early 17th century. Barbados was a British colony until gaining independence in 1966, making it the only Caribbean island that didn't change hands during colonial times. In 2020, the population of Barbados is estimated at 287,375, an increase from the 277,800 population at the 2010 census, making it the 183rd most populated country in the world.

Barbados is the 4th most densely populated country in the Americas, and 15th globally, and it ranks as the 10th most populous island nation in the region. Barbados has an estimated population of 287,375 with a density of 660 people per square kilometer (1,704/square mile).

The capital and largest city of Barbados is Bridgetown, with a population of 110,000 and a density of 7,300 people per square kilometer.

About 90% of Barbadians, or Bajans, are of Afro-Caribbean descent and mixed descent. The rest of the population is comprised of Europeans (4%) mostly from Ireland and the United Kingdom, as well as Asians, particularly Indians and Chinese. Among the white Barbadians are an underclass called Redlegs, who are descendants of Irish slaves and prisoners imported to Barbados.

The Indo-Guyanese are a major population outside of the Afro-Caribbean community. Chinese-Barbadians make up a small percentage of the country's Asian population, most of whom arrived during World War 2 from Hong Kong. There are also communities of Syrians and Lebanese on the island, most of whom arrived through trade opportunities. Barbados does have a Jewish community of descendants who arrived in the early 17th century.

While English is the official language of Barbados, a regional variant called Bajan is spoken by most people in informal settings. Interestingly, Barbados shares a unique distinction with Japan: both countries have the highest per capita occurrences of centenarians on earth.

How Many People Live in Barbados? 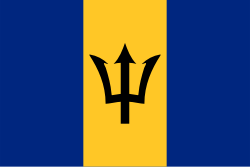 Barbados is not growing rapidly, but it is growing. By 2025, it is expected to break past 300,000 for the first time. From there it's projected to level off until the end of the century.