Algeria, or the People's Democratic Republic of Algeria, is located in North Africa. Algeria is made up of 48 provinces and more than 1,500 communes with a 2020 population estimated at 43.85 million, making it the 33rd most populous country. It is also the 10th largest country and the largest country in Africa.

Roughly three-quarters of Algeria's population live in urban areas, and thus, there are several sizable cities. The largest of these cities is the appropriately named capital Algiers, with a population of 3.416 million. The only other city with a population exceeding one million is Oran. A few other notable cities are Constantine, Annaba, Blida, and Batna- all of which have a population under 500,000.

Algeria was inhabited by several prehistoric people, including the Caspian culture, and many empires and dynasties have ruled the region over its history, such as the Romans, Byzantines and the Turkish Ottomans. At the beginning of the 20th century, Algeria had 4 million people.

Today, Algeria is inhabited mostly by Arab-Berber people, with 90% of the population living in the coastal area of the north with the people in the Sahara desert concentrated in oases. There are about 1.5 million remaining nomadic and semi-nomadic people in the country. Algeria is a young country, with 1 in 4 people under the age of 15. Interestingly, women play an important role here, making up 70% of Algeria's lawyers and 60% of its university students.

97% of the Algerian population is Muslim. There aren't really any other religions with a significant population. The second most popular religion is Christianity with a meager 285,000 followers.

About 96,000 refugees and asylum seekers are living in Algeria, most of whom are from Western Sahara. There are also about 35,000 Chinese migrant workers and up to 165,000 Sahrawis from Western Sahara in refugee camps. Between 600,000 to 2 million Algerian Turks live in Algeria, and they are today known as Kouloughlis.

The largest concentration of Algerians outside of the country are in France, with more than 1.7 million Algerians. Algeria is the second-largest French-speaking country in the world in terms of the number of speakers. An estimated 11 million Algerians read and write in French.

The French colonized Algeria during the mid-1800s and around 50,000 emmigrated there during that time. By the 1900s, Europeans accounted for 20% of the population. The French were eventually ousted in 1945 during a war than killed at least 700,000 Algerians.

The Algerian population has comparatively stabilized after the long period of war it experienced. However, the rate of growth has slightly been decreasing, since 2015.

How Many People Live in Algeria? 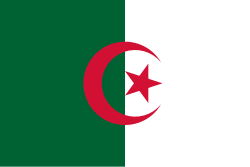 Algeria is currenly growing at a steady pace, and is projected to do so until around 2060. In the next 25 years, an estimated 10 million people will be added to it's population.