Bolivia is a landlocked country in South America officially known as the Plurinational State of Bolivia. The area was originally part of the Inca Empire before colonization. Bolivia has a very multiethnic population estimated at 11.67 million in 2020, up from 2014's estimate of 10,918,674. This makes Bolivia the 80th most populous country in the world, despite its low population density.

The vast South American country of Bolivia ranks 26th in terms of size because of its 424,200 square miles (1,099,000 square kilometers) of area, but it has one of the lowest population densities in the world. There are only 26 people per square mile (10 people per square kilometer), which ranks 180th in the world. The country is located close to the Pacific Coast, but is, in fact, landlocked, surrounded by Peru, Chile, Argentina, Paraguay, and Brazil.

Nearly 70% of the people living in Bolivia reside in urban areas, and there are several large metropolitan areas that account for this. The largest city is Santa Cruz de la Sierra, with a population of 3.32 million in 207 square miles of space. Santa Cruz de la Sierra is one of the fastest growing cities in the entire world, and serves as the main business center in Bolivia, situated along the Pirai River. The country's political and economic center, La Paz, is the second largest city with a population of 2.4 million people. El Alto is nearly tied for second place with a population of 2.3 million. The agricultural city of Cochabamba is home to nearly 2 million and is the most socially and economically progressive part of the country. There are many other smaller cities in Bolivia, but no others with populations over one million.

Bolivia has a very diverse population with more than three dozen native groups, the largest of which is the Quechuas at 2.5 million, followed by the Aymaras (2 million), the Chiquitano (180,000) and the Guarani (125,000). The full Amerindian population is 55%, with 30% mestizo and 15% white. Indigenous people account for 60% of Bolivia's population, including the Andean and Aymaras. Many mestizos in Bolivia assume the mestizo identity while also identifying with indigenous cultures.

Christianity is the predominant religion in Bolivia, with Roman Catholics making up 76% of the population, and Protestants make up 17%. Despite these significant figures, most of these people don't practice regularly. The constitution calls for a separation of church and state, and the people of Bolivia have religious freedom.

The economy of Bolivia is heavily reliant upon the hydrocarbon sector, so much so that the economy lacks diversity. Government presence in the economy has been increasing as of late as the judiciary is so easily politically influenced and nationalization is becoming prevalent. Despite the large amounts of natural gas the country has, there is much social unrest, poverty, and drug activity. The current president Evo Morales is in his third consecutive five-year term and has complete control of all political institutions. Morales eliminated term limits and plans to remain in office indefinitely.

Bolivia became free from Spanish rule in 1825 with Simon Bolivar as their leader. The country originally touched the coastline, but lost some of its territories to Chile, Brazil, and Paraguay in the years following the country's independence. Peasants and miners overthrew the military regime of a government in 1952, which also introduced the universal right to vote, significant land redistribution, and improved the education system and rights of the indigenous people. Che Guevara led the "peasant uprising" in the late 1960s. The US helped suppress this uprising, and Guevara was killed by those who had once been fighting for him. Hugo Suarez staged a separate military coup a few years later and gained power. Bolivia has experienced pretty much continual civil unrest with power regularly changing hands.

Bolivia's population has grown rapidly from 8.2 million in 2001 to just over 11 million. Its population has also tripled in the last 50 years. Today, almost 64% of the country's population lives in urban areas, with 70% of the people concentrated in La Paz, Santa Cruz and Cochabamba. The population growth rate is fairly steady and maintainable around 1.5%.

How Many People Live in Bolivia? 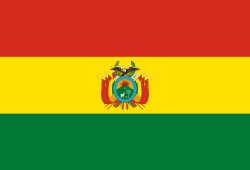 Bolivia is a quickly growing country and its population is projected to grow to 11.6 million by 2020.