Burkina Faso, or Burkina, is a landlocked nation in West Africa that is bordered by the Ivory Coast, Togo, Ghana, Benin, Niger and Mali. Burkina is a rapidly growing country with an estimated 2020 population of 20.90 million, which makes Burkina that 59th most populous country in the world.

Burkina Faso's population is growing rapidly. The 2006 census found a population of 14 million, which has already grown to almost 18 million. The country does have a low population density, however, of just 57 people per square kilometer, which ranks 145th in the world.

Most of the population is located in the center and south of Burkina Faso, with a density that goes over 48 people per square kilometer in some areas. Hundreds of thousands of people regularly migrate to Ghana and Cote d'Ivoire for seasonal work.

Most of the 17 million people in Burkina Faso belong to one of two West African ethnic cultural groups: the Voltaic and the Mande. Voltaic Mossi make up about 50% of the population and are descended from warriors who moved to the area from Ghana around 1100, establishing an empire that lasted over 800 years.

About 69 languages are spoken in the country, 60 of which are indigenous. About 40% of the population speaks Mossi, although the official language is still French, which was introduced during the country's colonial period.

The median age is just under 17 years old. A 2005 World Health Organization report estimated that almost 73% of girls and women in Burkina Faso have undergone female genital mutilation, which is done according to traditional rituals in the area. Burkina Faso is one of the last great strongholds of slavery in the world, and children in the country are often victims of slavery.

Activists in the country have lobbied for more attention to birth control, which has been largely ignored as attention has focused on preventing HIV/AIDs. Without controlling its population, Burkina Faso will have difficulty improving living standards.

The majority of the population in Burkina Faso, 60.5%, practice Islam. The remainder of the population of relatively religiously diverse, with 23.2% practicing Christianity, 15.3% following indigenous beliefs, and the remaining 1% having no reported religion.

Burkina Faso is one of the world's most impoverished countries and over 90% of its citizens are farmers, with cotton being the most common crop. Literacy rates are much lower than surrounding nations, and the people that live here are constantly plagued by terrorist attacks, political insecurity, low energy supplies, and poor transportation options.

The indigenous population, known as the Mossi Kingdom, was in control of the region since the 1000s. In 1895, they defeated French colonial forces to become a French protectorate. The indigenous army again fought the French in 1915, but this time the French won and executed the leaders of the African army. The nation finally got its independence in 1960. As an independent country, Burkina Faso's population flourished, going from growing at 1% annually in 1960 to the robust growth of today.

Since the turn of the millennium, Burkina Faso has experienced a couple of meningitis outbreaks which killed thousands.

With a current population growth rate of nearly 3%, and very close to half of the population being under 15 years of age, Burkina Faso is facing a bit of a population growth issue. Contraceptive education has increased, and many have shown interest but actual usage rates are still very low. The total fertility rate has decreased from 6.9 children born to the average woman in 1990, down to 5.7- but this number is still very high.

How Many People Live in Burkina Faso? 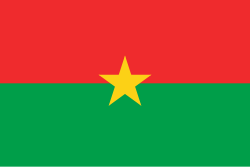 Burkina Faso has a total fertility rate of 6 children born to every woman, which is the sixth highest on earth, and the country has a population growth rate of more than 3%. If this rate continues in Burkina Faso, one of the poorest countries in the world, its population will surpass 20 million by 2020.