Ecuador, officially the Republic of Ecuador, is bordered by Colombia, Peru and the Pacific Ocean. Along with the mainland, the country also includes the Galapagos Islands in the Pacific, which are about 620 miles west of the mainland. In 2020, Ecuador has an estimated population of 17.64 million, which ranks 67th in the world.

Ecuador, which is on the west coast of South America, has the Pacific Ocean along its western border and otherwise touched by Colombia and Peru. Based on the 2019 population of 17,096,322, the population density of Ecuador is 156 people per square mile (60 people per square kilometer) – placing the country at 120th in the whole world. This is spread over the country’s 109,483 square miles (283,560 square kilometers) of surface area.

The majority of people in Ecuador live in the central regions, the Andes mountains or along the coast of the Pacific Ocean. Only 3% of the total population lives in the tropical forest east of the mountains, which still remains very sparsely populated.

Most of the ethnic groups of Ecuador descend from the Spanish colonists and South American Indians, as the mixture of these two groups created the Mestizo category. Afro-Ecuadorians are descendants of black slaves who arrived in the country to work on plantations in the 16th century. Until the 1950's, the geography of ethnicity in Ecuador remained very well-defined until a jump in migration.

Just decades ago, most Mestizos lived in small rural towns in the countryside, Indians made up the majority of the rural Sierra population, black residents lived in Esmeraldas, Carchi and Imbabura provinces while the white population resided mostly in the large cities. Due primarily to pressure on the Sierra land resources, Indians began migrating to the cities and many began switching their ethnic identity to Mestizo beginning in the 1980's.

Ecuador has a long history with Christianity, and it remains the prominent religion today, but it is not the power that it once was. Catholicism was named the official religion in 1869, but in 1899 a revised constitution allowed for more religious freedom. Today 79% of the population is Roman Catholic, 11% are Protestant, and the majority of the remaining 10% of the population is atheist or agnostic.

Oil is by far the most prominent industry in Ecuador, and they experienced a significant economic boost during the 2007-2014, but have been struggling to find their feet in the years since. The economy is still growing slightly, but not at the rates of the boom. In March of 2019, the International Monetary Fund approved $10 billion US dollars in support.

Ecuador has been its own nation, free from Spain, since 1830. This was followed by a long period of internal conflict due to conflicting ideologies within the newly forming government. However, Ecuador has managed to stay out of any major disputes with other nations, save a minor border war with Peru in 1981. The rate of growth was close to 3%, for most of the 1900s until it began to gradually slow during the 1908s, coming down to 2% around 2000.

Ecuador has a slow average population growth rate of just 1.4%, which ranks as 87th in the world. The birth rate is also low at only 19.23 births per 1,000 people, although the death rate is one of the lowest in the world at 5.03 deaths per 1,000 people. This means Ecuador remains higher than replacement level fertility and the population is expected to continue rising rather than remain stagnant.

It's estimated that between 2 and 3 million Ecuadorians live abroad, although increased unemployment in Spain, the United States and Italy is slowing this emigration. It's believed that many emigrants will return to the country over time. Ecuador also has a small but growing population of immigrants. It's currently the top recipient of refugees in Latin America, the vast majority of which are Colombians escaping violence in their own country. The rate of emigration to Ecuador is expected to grow.

There are also nearly 100,000 American and 30,000 European Union expatriates in Ecuador, many of whom moved to the country for business opportunities or to retire. Given the relatively low cost of living, it's expected that this trend will continue.

Ecuadorian President Correa's "Welcome Home Plan" is credited with helping to encourage emigrants to return to Ecuador, and now more people move to Ecuador than leave it.

How Many People Live in Ecuador? 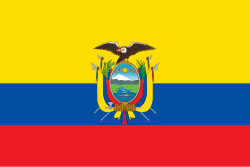 Ecuador has a slow average population growth rate of just 1.4%, which ranks as 87th in the world. Birth rate is also low at only 19.23 births per 1,000 people, although the death rate is one of the lowest in the world at 5.03 deaths per 1,000 people. This means Ecuador remains higher than replacement level fertility and the population is expected to continue rising rather than remain stagnant.

Ecuadorian President Correa's "Welcome Home Plan" is credited with helping to encourage emigrants to return to Ecuador, and now more people move to Ecuador than leave it. It's estimated that if the country continues its current stable population growth, it will have 21.1 million citizens by 2050.