Guatemala is a Central American country bordered by the Pacific Ocean, the Caribbean, Mexico, Honduras, Belize, and El Salvador. In 2020, Guatemala has an estimated population of 17.92 million, which ranks 66th in the world.

The small Central American country of Guatemala spans the narrow strip of land between North and South America, touching both the Pacific Ocean and the Caribbean Sea. Its border also touches Mexico, Belize, El Salvador, and Honduras. Based on the 2019 population of 17,572,053, the population density of Guatemala is 418 people per square mile (161 people per square kilometer) – placing the country at 54th in the whole world. This is spread over the country’s 42,042 square miles (108,890 square kilometers) of surface area.

Just over half of the Guatemalan population live in urban areas. The largest city and capital of Guatemala is Guatemala City or Nueva Guatemala de la Asunción. Guatemala City has a metro population of more than 2.45 million. Guatemala city is home to most of the country's economic, financial and government sectors. The only other city with a population in the 7-digits is Villa Nueva with 1.5 million residents. The next largest cities in Guatemala are significantly smaller- Mixco with 690,000 people, and San Miguel Petapa with 180,000.

Guatemala is a very multiethnic country with a culture that reflects its indigenous and Spanish influences. The 2010 census found that 41% of Guatemalans are Mestizo (Ladino), which means they have mixed European and indigenous ancestry. About 39% of Guatemalans are full Amerindian, which is a higher percentage than any other nation in the Western Hemisphere. The majority of indigenous people in Guatemala are of the Maya people: K'iche' (11%), Q'eqchi (8%), Kaqchikel (8%), Mam (5%), and other Mayan (7.5%).

Whites of European descent, or Criollo, account for 18.5% of Guatemala's population. Most are descended from Spanish and German settlers, although other ancestry groups are represented to a smaller degree, including Norwegian, French, Italian, English, Irish, and Russian.

There are about 110,000 Salvadorans living in Guatemala. There is a sizable population of Garifuna, who are descended from black Africans who intermarried with indigenous peoples. Mulattos and Afro-Guatemalans are mostly descended from plantation workers. Guatemala has a large population of Asians, particularly of Chinese and Korean descent. These groups make up the remaining 1.5% of Guatemala's population.

While 93% of the population speaks Spanish, there are also 21 Mayan languages spoken in Guatemala as well as two non-Mayan Amerindian languages.

Due to the country's long civil war, there is a large Guatemalan diaspora. Most Guatemalans living abroad are located in the U.S., where there is believed to be between 480,000 and 1.5 million Guatemalans.

Guatemala has one of the poorest health ratings in Latin America with among the highest infant mortality rates and one of the lowest life expectancy rates.

Christianity, particularly Roman Catholicism, has been the dominant religion in Guatemala throughout its history and remains so today with 87% of Guatemalans practicing some form of Christianity. There are really no other religions that form a significant portion of the population and most of the remaining 13% of the population are atheist or agnostic.

The Guatemalan economy has been doing really well in recent years, growing at least 3% annually since 2012. Although their economy has been thriving, it hasn't positively impacted most of the country's citizens as much as one might think, as they have some of the highest malnutrition and maternal-child mortality rates in Latin America. The most profitable industries are in energy, vehicles, technology, and tourism.

Guatemala was a Spanish colony from the early 1500s until 1821 when it became an independent part of the Mexican empire, and gained full independence by 1839. Over the next 100 years or so, Guatemala slowly made its way towards a democracy until the military-backed Carlos Arena was elected president in 1970. Very soon after his election, Arena began a program to eliminate liberals in the country, killing 50,000 citizens.

A few years later, in 1976, 27,000 people were killed in an earthquake which also left more than a million citizens homeless. Resentment towards the government was beginning to grow in and 1981 the government killed another 11,000 of its own in response to anti-government guerrilla activity. A new president, Cerezo Arevalo, was elected in 1985 as a Christian Democrat. The people of Guatemala tried to overthrow him 4 years later in 1989, resulting in a civil war that killed 100,000. The civil war ended in the mid-90s after taking over 200,000 lives.

Guatemala is the most populated country in Central America, and that will likely true with its current annual growth rate of just under 2%. The rate of growth is a little faster than the country's infrastructure can currently handle, and policies have been proposed to address the issue but nothing has had a significant effect. There are high levels of inequality in Guatemala, particularly amongst the Mayans and Ladino populations, which represent 40% and 60% of the population, respectively.

How Many People Live in Guatemala? 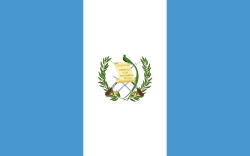 Guatemala has a fairly high fertility rate, despite poor access to health care and a low life expentancy. The country is currently growing at a rate of 2.5% per year.