Iraq, or the Republic of Iraq, lies in western Asia encircling the Mesopotamian plain, the northwestern part of the Zagros mountain range and the eastern branch of the Syrian desert. Syria lies on the northwest border of Iraq, Turkey is to the north, Iran is east, and Jordan is to the west. It has a narrow coastline of about 58km at the North Persian Gulf.

The Republic of Iraq has an area of 168,754 square miles (437,072 square kilometers), and is mainly divided into 3 sections: a desert area in the west, a mountainous area in the north, and a large fertile plain in the middle of its southern area that is fed with water by the Euphrates and Tigris Rivers.

Nearly 70% of Iraq's population lives in urban areas, and they have several large cities that reflect that. The largest by far is the nation's capital, Baghdad, with a population of 9.5 million. The cities of Basra and Mosul both have populations exceeding 2 million. Erbil, Kirkuk, Sulaymaniyah, and Hilla have populations of over one million.

Almost 75% of Iraq's population is made up of the dominant ethnic group -- the Iraqi or Mesopotamian Arabs. Other major ethnic groups include the Kurds (17%), Turkmen (3%), Assyrians (2%), and Persians (2%). There are about 20,000 Marsh Arabs in the southern part of the country and a population of 2,500 Chechens. Southern Iraq is also home to a community of Iraqis of African descent, who are descended from slaves prior to the Zanj Rebellion during the 9th century. Iraq was once home to a large Iraqi Jewish population of about 150,000 during the 1940s, although virtually all have left the country.

The official language in Iraq is Arabic, which is understood almost universally, although 10-15% of the population also speaks Kurdish (also used in official work).

Islam is by far the most common religion at 95% of the population. Non-Muslims, mostly Assyrian Christians, make up 5% of the population. The Christian community in Iraq has existed for nearly 2,000 years and most are descended from the pre-Arab Mesopotamians-Assyrians. It's believed that 65% of Muslims are Shia while the remaining 35% are Sunni. Najaf and Karbala, Iraq are two of the holiest places for Shia Muslims.

The median age of the Iraq population is 20 years of age, with a total life expectancy of 74.9 years of age. The World Happiness Report shows a 2018 ranking of 117 with a rating of 4.45 out of a possible 10. The factors considered in this report include GDP per capita, social support, healthy life expectancy, freedom to make life choices, generosity and perceptions of corruption. The scores here indicate a strong GDP, strong social support, but low generosity and little freedom to make life choices were also indicated.

Iraq has a large diaspora and nearly 2 million Iraqis have fled since the invasion in 2003, most going to Jordan and Syria. It's believed that there are almost 2 million people displaced within Iraq. The UN said in 2007 that almost half of Iraq's middle class population had fled persecution with no plans to return. Over half of Christians have fled the country since the U.S.-led invasion with almost 59,000 granted refugee-status citizenship in the United States. Meanwhile, there are about 160,000 Syrian refugees in Iraq who have fled the Syrian civil war.

Iraq's population has been growing steadily despite its political turmoil and bloodshed since 9/11 in 2001. Estimates vary from between 100,000 to 1 million regarding the number of Iraqis that have died in the war with America. These numbers vary so significantly because different factors are being counted or recounted such as violent deaths, or the overall death rate before and after America invaded the country- not all of which were directly related to war.

Regardless of the war-related loss of life, the number of births still far outnumber the deaths, and hence the population has continued to increase.

How Many People Live in Iraq? 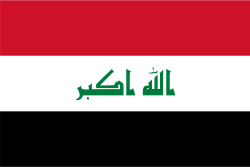 While Iraq has a high growth and fertility rate, the invasion has caused widespread displacement. Despite more than half a million deaths since 2003, Iraq's population has grown significantly since that time in spite of a higher death rate and an exodus of refugees. This is because Iraqi families have many children -- or 4 on average -- and infant mortality is low.