Lebanon, or the Lebanese Republic, is a Democratic Republic in the East Mediterranean. The population of Lebanon is estimated at 6.83 million in 2020, up from the 4.43 million estimated in 2013, which makes it the 109th most populated country in the world. No official census has taken place in Lebanon since 1932 due to the sensitive balance between the country's religious groups.

The tiny country of Lebanon occupies approximately 4,036 square miles (10,452 square kilometers) of area in western Asia along the Meditteranean Sea and wedged between Syria and Israel. Lebanon ranks 165th in the world in terms of area. With an estimated population at over 6 million as of the year 2018, the population density is 1507 people per square mile (582 people per square kilometer) overall. This earns the country a ranking of 10th most densely populated country in the world.

The capital of Lebanon is also the country's largest city, Beirut, which has a population close to 2 million and has an urban population density breaching more than 3,500 individuals per square kilometer. The religious capital of Tripoli is Lebanon's second-largest city, located in the northern portion of the country, with roughly 230,000 people living there. The agricultural hub of Sidon in Lebanon's third-largest city with 163,554 people living there. The cities of Tyre and Nabatîyé et Tahta are the only other urban centers in Lebanon with populations over 100,000.

While nearly all Lebanese are identified as ethnically Arab, this is an example of panethnicity, or grouping self-identified ethnicities into a single group, as the Lebanese people are descended from many groups and it's today a blend of a dozen closely related groups. The World Factbook notes that a portion of the population may identify as Phoenician in origin rather than as Arab.

The official language used in Lebanon is Arabic, with additional use of French, English, and Armenian.

The median age of the Lebanese population is at 30.5 years in 2018, with a total life expectancy of approximately 77.8 years of age.

In terms of religion among the population, we can see a breakdown of 54% Muslim following, 40.5% Christian following, and small percentages of a variety of other religions - including Buddhists, Mormons, and more.

In the 2018 World Happiness Report, Lebanon maintained a ranking of 88 with an overall happiness rating of 5.199 out of a possible 10. The report takes a variety of factors into consideration including GDP per capita, social support, healthy life expectancy, freedom to make life choices, generosity, and perception of corruption.

Evidence of civilization in the area predates recorded history, and Lebanon was once home to the maritime Phoenicians, a culture that existed for over 1,000 years. The region came under Roman Empire rule and eventually turned into the Empire's largest center of Christianity before it was conquered by the Arab Muslims and then the Ottoman Empire.

There have been many migration waves in the country, as more than 1.5 million people emigrated from Lebanon between 1975 and 2011. Lebanon also hosts close to 1 million refugees and asylum seekers, most notably those from Palestine, Iraq and Syria. It's estimated that there are over 600,000 Syrian refugees (with recent sources now estimating 1 million refugees) in Lebanon escaping violence in their own country.

How Many People Live in Lebanon? 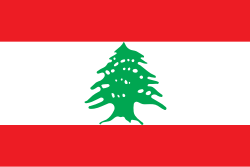 Lebanon has had very uneven population growth over the past 50 years, and it's currently growing at 1% per year. Its urbanization rate is rapidly growing and expected to reach 86% in 2020, at which point its urban population will reach 4.1 million, with a total population pushing 6 million in the next decade.