Rwanda is a sovereign state in central Africa with a widely varied geography. Rwanda has one of the highest population densities in Africa (1,060/sq mi) with a young, mostly rural population. In 2020, the population is estimated at 12.95 million, an increase from 2013's estimate of 11.8 million. This puts Rwanda 76th in the world.

Rwanda is a landlocked nation found in east Africa between Uganda and Burundi and covers 10,169 square miles (26,338 square kilometers) of surface area. For such a small nation, Rwanda is very densely populated. Using the 2019 population of 12.63 million people, the population density of Rwanda is 1242.0 people per square mile (479.5 people per square kilometer), which ranks 14th</sup in the world.

There are very few major towns in Rwanda, with only 17% of the population living in urban areas. The capital city of Kigali is by far the largest city with a population of 745,261, and more than a million people living in the greater metropolitan area. The city is the economic center of the country but also served as the headquarters of the Rwandan Genocide that occurred in 1994. Other larger towns are Gitarama, Butare, Ruhengeri, and Gisenyi, all with less than 100,000 people.

94% of the people in Rwanda practice some form of Christianity, making it the dominant religion by far. Of the remaining population, 4.6% practice Islam, and 1.4% practice something else. Of the 94% of the population that is Christian, 56.9% are Catholic, 26.0% are Protestant, and 11.1% are Seventh-Day Adventists. Within the small percentage of people that practice other religions, there are a few secretive and small groups of Buddhists and Hindus- most of which have immigrated from elsewhere.

Since the turn of the 21st century, Rwanda has been experiencing significant economic growth- largely due to policy reform. Unfortunately, it is projected that the current growth is unsustainable because the foundation of the government is institutionally weak. The main industries within Rwanda are agriculture, energy, industry, and tourism.

Rwanda was first settled by hunter-gatherers, then Bantu settlers. In 1884, Germany colonized the country, then Belgium during WWI. In 1959, the Hulu people revolted, massacring a large number of Tutsi people and establishing a new state three years later. The Tutsi launched a civil war in 1990, then a genocide in 1994 in which Hutu extremists killed up to one million Tutsi and Hutu.

The rate of growth in Rwanda took a sharp upswing around 2000 following the genocide that took so many lives but has since steadied into consistent annual growth over 2%. This growth, however, is posing some challenges for Rwanda, as it is already Africa's most densely populated non-island nation. An increase in food supply must match the rate of population increase, yet there is no more space for additional agriculture. Like many countries in Africa, large families are part of their culture and the birth rate is over 5 children born per woman.

How Many People Live in Rwanda? 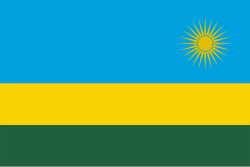 Rwanda has worked hard to control its growth as Africa's most densely populated county, but it's expected to still reach 16 million by 2020.