South Korea is officially known as The Republic of Korea and is located in the southern part of the Korea peninsula, which neighbors China to the west, Japan to the east, and North Korea to the north. The land area covers 99,392 square kilometers and has a population of 51.27 million in 2020, ranking 28th in the world. The largest city and capital is Seoul, which has a population of just under 10 million. Under its current constitution, the state is also referred to as The Sixth Republic of South Korea. The country had its first election at 1948 and operates under a powerful presidential system.

The land area covers 99,392 square kilometers (or 38,375.46 square miles) and this small area (in combination with staggering population numbers) contributes to the fact that South Korea is known as for its population density, which is more than 10 times the global average. Due to rapid migration as a result of the quick economic expansion from the 1970s, South Korea is now Asia's fifth largest economy and one of the world’s 15 largest economies.

South Korea is one of the planet’s most densely populated countries with a density of 503 people per square kilometer, or 1,302 people per square mile. Nearly 70% of South Korea's land area is mostly uninhabitable due to it being mountainous and the population is established in lowland areas, contributing to a density that is higher than average. In 1975, an estimate was made that South Korea's population density in its cities, each containing at least 50,000 people, was nearly 4,000 on average. As a result of the continued following of the practice to migrate to urban areas, the figure was much higher in the 1980s.

Seoul's population density was estimated around 17,000 average persons in 1988, an increase of over 3000 when compared with 1980's population density of nearly 14,000 people every square kilometer. The current density of Seoul is almost twice that of New York City. The density of Busan, the second largest city in the country, was just over 8,500 persons for every square kilometer in 1988, while this figure stood at a little over 7,000 people back in 1980.

The government's Economic Planning Board believes the population density will be 530 people for every square kilometer. The population is expected to stabilize by 2023, according to the census. The largest cities, according to statistics taken in 1895, were Busan (3.5 million inhabitants), Seoul (9.6 million), Daegu (2.03 million), Gwangju (0.9 million), Incheon (1.4 million) and Daejeon (0.86 million). Statistics taken by the government show that Seoul’s population passed the 10 million mark near the end of 1988. Meanwhile, the average growth rate of its annual population in the 1980s was greater than 3%. Most of the growth was as a result of migration with natural increase playing a smaller role in this change. Surveys taken show that seeking a new job or a job transfer were the major reasons that new immigrants gave for moving. Many immigrants also cited education and convenience as factors in moving to the capital.

The population of Seoul made up 23.8% of South Korea’s population in 1985. However, there has been greater growth in the provincial cities as compared to the capital, especially in the southeastern coastal area, which includes Pohang, Pusan, Ulsan, Chinhae, Yeosu, and Masan. Figures from the census show that the population of Ulsan increased eighteen times, with an increase of 521,300 inhabitants from 1960 to 1985. In contrast, Kwangju’s population did not even increase three times from 1960 to 1985.

Rapid urban growth has resulted in various problems for South Korea. High-rise apartments were constructed in order to help alleviate housing shortages. But it also caused severe hardship on the thousands of people who were forced to relocate from their old neighborhoods since they were unable to afford the rents in the new buildings. In the late 1980s, squatter areas which contained one-story shacks still existed in different parts of Seoul. Housing for most of the population, bar the wealthiest, was generally cramped. The concentration of factories in urban areas and the use of coal for heating during the severe winter months resulted in dangerous levels of air and water pollution, issues that still remain today.

Korea isn't a particularly religious nation, with only 44% of the population stating they having a faith. However, they differentiate themselves from many other nations because of how well people of all belief systems coexist peacefully.

The average life expectancy from 2013 WHO data is 81.6 years, which is 16th in the world. Although there has been a significant increase in life expectancy since 1950, South Korea still faces numerous problems in relation to healthcare. One of the major issues it faces is [the impact of the environmental pollution](http://www.upi.com/Top_News/World-News/2015/03/23/Pollution-in-South-Korea-poses-increasing-health-threats/5191427123633/) on increasing urbanization which has an adverse effect upon life expectancy. According to the Ministry of Health and Welfare, chronic disease accounts for the majority of diseases in South Korea and is responsible for 81% of deaths. Approximately 19.9% of all adults in the country smoke, leading to health problems and death. South Korea also has the 2nd highest suicide rate in the world, although government efforts have led to recent declines. South Korea had the best rate of influenza vaccination in Asia with 311 people vaccinated per 1000. In 2013, the government's expenditure on healthcare was 7.17% of the country's GDP.

Since 2009, South Korea has improved its record for having the world's lowest birthrate. However, the birthrate still remains low and if this continues, the population is expected to decrease by 13% to 42.3 million in 2050 and extinction by 2750 is a possibility. The country's birthrate is currently 1.19 children per mother, one of the lowest in the world that is only larger than birthrates in Taiwan, Singapore, Macau and Hong Kong.

The population is shaped by international migration; after World War II, about four million people reached South Korea. This trend of net entry reversed over the next 40 years of immigration. The percentage of foreign nationals are also growing rapidly, and today it’s the most homogeneous society in the world with 99% of residents being of Korean ethnicity. The birth rate of South Koreans is no longer the lowest in the world, but a low birth rate and aging population continue to lead to concerns regarding the future population.

Currently, the aging population and the low birthrate of the country leaves future growth unknown. Recent studies indicate that the population could drop by 40 million to just 10 million by the year 2136, a widespread problem that also plagues other Asian countries including Japan.

How Many People Live in South Korea? 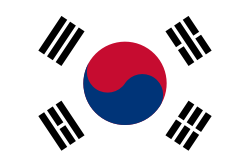 South Korea is facing a low birth rate and a rapidly aging population. By 2018, 14%of its population will be over 65, making it officially an aged society. This makes a problem for new recruitments and shall result in low productivity.