Guinea, officially the Republic of Guinea, is a country in West Africa that is sometimes called Guinea-Conakry to distinguish itself from the Republic of Equatorial Guinea and Guinea-Bissau. Guinea is bordered by the Atlantic Ocean, Guinea-Bissau, Senegal, Mali, Sierra Leone, Liberia, and Ivory Coast. In 2020, Guinea has an estimated population of 13.13 million, which ranks 75th in the world.

The country of Guinea is found on the west coast of Africa between Guinea-Bissau and Sierra Leone and covers 94,926 square miles (245,860 square kilometers) of surface area. Using the 2019 population of 12.77 million people, the population density of Guinea is 134.5 people per square mile (51.9 people per square kilometer), which ranks 127th in the world.

There are 24 ethnic groups in Guinea. The largest group is the Fula (40%), who live mostly in the Fouta Djallon region in central Guinea. The Mandingo account for 30% and live mostly in eastern Guinea. The Susa (20%) live in the coastal area of northwestern Guinea. The people living in the Guinée Forestière region in the southern part of the country are made up of many minority ethnic groups, including the Koniake (a sub-group of the Mandinka), Kissi, Guerze, Diakhanke (a sub-group of the Mandinka), Loma, Kuranko, Yalunka, and Gberese. There are also about 10,000 non-Africans in Guinea.

Guinea has one of the lowest literacy rates in the world with less than 30% of adults literate in 2003. Primary education is compulsory for just eight years, and most children do not attend for long or ever go to school.

French is the official language, although more than 24 indigenous languages are spoken in Guinea.

The predominant religion is Islam, practiced by about 85% of the population, followed by Christian (8%) and traditional beliefs (7%). Regardless of their religion, many of the people on Guinea incorporate indigenous African beliefs into their belief system. Within the Muslim population, nearly all of the people are Sunni. Within the Christian community of Guinea, there are Roman Catholics, Anglicans, Baptists, Seventh-Day Adventists, Evangelicals, and Jehovah's Witnesses.

The land of Guinea is rich in natural resources and is the site of over one-quarter of the world's bauxite reserves, nearly 2 billion tons of iron ore, as well as diamond, gold, and uranium deposits. Although agriculture is not presently one of their major industries, it certainly could be given their ideal land and climate conditions. Although there is considerable wealth and potential wealth in Guinea, there is extremely wealth inequality and Guinea is one of the poorest West African countries overall. Radio is still the only means of receiving information for most of the people in Guinea, and there is only one radio network, which is owned by the government.

Guinea became its own colony, separate from Senegal, in 1891 when France declared it as such. By 1906 Guinea was part of the French West African Federation. The people of Guinea were never pleased with the French occupation and struggled or their independence for much of the mid 20th century, finally gaining the beginnings of democracy in the 1990s. During this time, the growth rate spiked significantly from under 3% to 5.43% in 1995. The growth rate has remained high but has dropped significantly since then. In 2000, Guinea was invaded by rebels from Liberia and Sierra Leone, causing the deaths of more than a 1,000 and displacing many thousands more.

The growth rate in Guinea went down somewhat after the spike in 1995 but has remained fairly high since. The annual growth rate in 2000 was 2.28% which has grown to 2.65% as of 2019. Rates this high are likely causing economic strain to the citizens when so much of the population is living in poverty.

How Many People Live in Guinea? 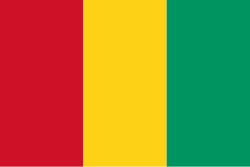