Guyana is a sovereign country on the northern coast of South America, and one of the only Caribbean nations that isn't an island. The country was colonized by the Netherlands and then became a British colony for more than 200 years before gaining independence in 1966. It's the third smallest independent state of South America with just 215,000 square kilometers (83,000 sq mi) of land. Guyana's 2020 population is estimated at 786,552, an increase from the 2013 estimate of 800,000, which ranks 164th in the world.

Guyana has a very racially, ethnically heterogeneous population originating from India, Africa, China and Europe, as well as many indigenous peoples.

The Indo-Guyanese, or East Indians, are the largest ethnic group at 44% of the population, and they are descendants of indentured laborers from India. The second largest group is the Afro-Guyanese (30%), descendants of African slaves. 17% of the population is of mixed heritage, and the indigenous Amerindians make up 9%. The largest indigenous groups of Guyana are the Arawaks, Wai Wai, Caribs, Akawaio and Arecuna.

How Many People Live in Guyana? 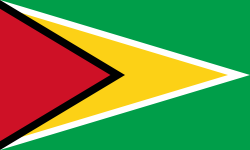 Guyana has experienced rather unstable growth and decline over the last fifty years and it's currently growing very slowly, a trend that will last for some time.